A compound synthesized by a team led by UT Southwestern scientists kills a range of hard-to-treat cancer types by targeting a previously unexploited vulnerability, a new study reports. The findings, published in Nature Cancer, could eventually lead to new drugs to fight these cancers, which currently have few effective treatments.

“Our discovery was serendipitous and largely a result of ‘following the science.’ We identified a new molecular target and a new vulnerability in cancer cells, and a new therapeutic agent directed against this vulnerability,” said study leader Ganesh Raj, M.D., Ph.D., Professor of Urology and Pharmacology at UT Southwestern and co-Leader of the Experimental Therapeutics Research Program of the Harold C. Simmons Comprehensive Cancer Center. “It potentially opens up a whole new paradigm for treating previously untreatable cancers.”

The Raj lab studies hormone-dependent cancers, including conditions Dr. Raj treats as a urologic surgeon. In 2017, he and his colleagues identified a compound called ERX-11 that targets the estrogen receptor (ER), a protein that drives the vast majority of breast cancers. Hoping to find compounds that were more potent, the researchers tested related experimental drugs against ER-positive cancers, comparing their results to those seen in other breast cancer types, including a form called triple-negative breast cancer (TNBC) – a subtype lacking receptors for estrogen, progesterone, and human epidermal growth factor 2 (HER2). Currently, no targeted treatments exist for TNBC, and its aggressive nature often leads to poor outcomes.

The researchers soon noticed that a compound called ERX-41 not only killed ER-positive cancers in petri dishes, but also readily killed TNBCs, including more than 20 distinct TNBC cell lines. Further experiments showed that ERX-41 also effectively shrunk human cancers and several of these cancer cell lines when grown as tumors in mice without affecting normal cells or causing any discernible toxicity in these animals.

Using microscopy to study cancer cells treated with ERX-41, the researchers quickly noticed that the endoplasmic reticulum, an organelle that helps fold proteins into their functional forms, was severely dilated in the treated cells. Further investigation showed that ERX-41 inactivates a protein called lysosomal acid lipase A (LIPA), which acts as a chaperone in protein folding. This inactivation increases stress within the endoplasmic reticulum, which in turn causes cancer cell death.

Other experiments showed that in addition to ER-positive breast cancers and TNBC, ERX-41 is also effective against other cancer types with elevated endoplasmic reticulum stress, including glioblastoma, pancreatic, and ovarian cancers, all of which have few effective treatments.

This work was performed in collaboration with scientists at UT Dallas (led by Dr. Jung-Mo Ahn) and UT Health San Antonio (led by Dr. Ratna Vadlamudi). ERX-41 and the related portfolio has been licensed to Dallas-based EtiraRx, which plans to move these drugs into clinical trials in early 2023. Dr. Raj serves in an advisory role to EtiraRx and has received grant support from the company.

This research was funded by grants from the National Institutes of Health (CA223828-01,  P30 CA54174-23, and Cancer Center Support Grant P30 CA142543), The Welch Foundation, the Pak Foundation, the John and Mimi Cole Foundation, and the Elsa U. Pardee Foundation. 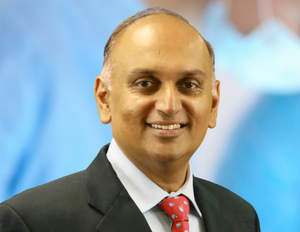