The research, which was co-led by Dr Dai Liang, Assistant Professor from Department of Physics, CityU and his collaborators from Wuhan University, focuses on the changes of DNA twist during DNA deformations because the twist is a key structural parameter of DNA double-helix. Increasing the DNA twist angle (overwinding) not only leads to the formation of DNA supercoils, but also enhances the energy cost of DNA unzipping and hence suppresses gene expression. Note that one key step of gene expression is unzipping a double-stranded DNA into two single-stranded DNA so that the DNA sequence can be read out. On the other hand, decreasing the DNA twist number (unwinding), promotes gene expression. "Active control of DNA twist angle, or DNA supercoils, is employed by bacteria for regulating gene expression," Dr Dai explained.

Observation of DNA twist changes with salt and temperature

In their research, Dr Dai and his collaborators observed substantial DNA twist changes when varying the salt concentration and temperature. Their experiments show that DNA twist increases with the rising concentration of sodium chloride (NaCl) and potassium chloride (KCl).

Cracked the mystery of the twist-change mechanism

After observing the intriguing results of salt-induced twist changes, the researchers were motivated to find out the physical mechanisms. Dr Dai pointed out that the relevant mechanisms are not straightforward due to the various interactions in DNA, such as hydrogen bonds, base stacking, and electrostatic interactions. Varying the salt concentration modifies many interactions in DNA. These interactions affect DNA twist through different pathways and make the final twist change elusive.

Dr Dai and his collaborators somehow cracked the case. They developed a simple physical model to reveal the mechanism for salt-induced twist change. "We found that more salt strengthens the screening of inter-strand electrostatic repulsion and hence decreases DNA diameter, which eventually increases the twist," Dr Dai added.

Their experiment confirmed that a 1°C increase in temperature causes the decrease of DNA twist of 0.01 degrees per base pair. "Don't overlook this '0.01 degree', such a small twist change per base pair can accumulate along a long DNA, say 1 million base pairs, and causes 10,000 degrees of rotation of about 28 full turns, which would lead to a complicated supercoil," said Dr Dai.

The findings were published in the academic journal Science Advances, under the title of "Twist-diameter coupling drives DNA twist changes with salt and temperature". Dr Dai and Professor Zhang Xinghua from Wuhan University are the corresponding authors. Tian Fujia, a PhD student from CityU's Department of Physics, and Zhang Chen from Wuhan University are the first authors. Other collaborators are from the Chinese Academy of Sciences and Songshan Lake Materials Laboratory.

Dr Dai, Professor Zhang led another related study with Professor Tan Zhijie who is also from Wuhan University. Eventually, they solved a mystery that existed for many years: how does DNA or RNA twist change upon stretching?

"The answer to it keeps evolving in the past two decades," said Dr Dai. Scientists expected that stretch should decrease DNA twist. However, an experiment in 2006 observed a counterintuitive trend: stretch increases DNA twist. Later in 2014, another experiment observed that stretch decreases RNA twist, an opposite trend with respect to DNA. "This observation is very surprising, considering that double-stranded RNA and DNA share similar structures but turn out exhibiting opposite responses," said Dr Dai.

After careful analysis of the force-induced twist changes in DNA and RNA under various conditions, the team found that stretch can both increase and decrease twist in both DNA and RNA, which depends on the situation of DNA or RNA. "Basically, there are four scenarios for DNA and RNA under stretch, while previous studies only observed some of these four," concluded Dr Dai.

Their findings were published in the academic journal Physical Review Letters, under the title of "Multivalent Cations Reverse the Twist-Stretch Coupling of RNA".  Dr Dai, Professor Zhang and Professor Tan are the corresponding authors of this paper. Tian Fujia from CityU's Department of Physics also participated. Other collaborators are from Wuhan University.

The above researches were supported by the Research Grants Council of Hong Kong and the National Natural Science Foundation of China. 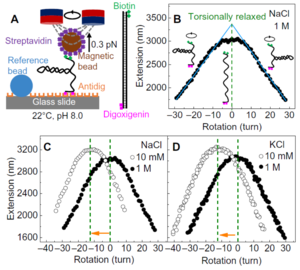 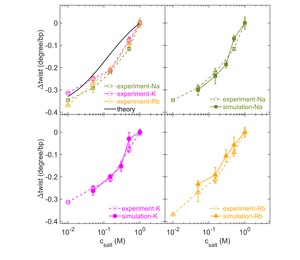 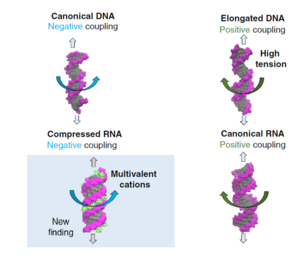