Resource pulses, i.e., occasional episodes of ephemeral resource superabundance, represent a fundamental mechanism by which energy, nutrients, and biomass are transported across ecotones. They are widespread in extant ecosystems; however, little is known about their deep-time record.

Recently, ZHANG Qianqi, a PhD student from the Nanjing Institute of Geology and Palaeontology of the Chinese Academy of Sciences (NIGPAS), under the supervision of Profs. WANG Bo and ZHANG Haichun, and his collaborators reported one such resource pulse—the earliest-known mayfly swarm—in a newly discovered fossil locality in the Xiwan Basin of Hezhou City, in southern China's Guangxi Zhuang Autonomous Region.

The results were published in Geology and Historical Biology.

Mesozoic research in the Xiwan Basin has a long history, with reports of plenty of insect fossils from the Lower Jurassic Shiti Formation. However, the newly discovered fossil locality in the basin features an abundance of new insects as well as plants and shark egg capsules.

"In view of the abundance of the diverse insects and plants, we propose that the fossil assemblage in the lower unit of the Shiti Formation be named the Xiwan Biota, which is among the richest Jurassic biotas in China," said ZHANG Qianqi.

In one fossil layer of the Xiwan Biota, the researchers found hundreds of mayflies. These mayflies were classified as a new taxon, Jurassephemera zhangi Zhang et al. (2022) and assigned to the extinct family Sharephemeridae, a stem group of mayflies in terms of taxonomic position. This is the first discovery of this mayfly family in China, and is the best-preserved fossil of the family.

"We measured the orientations of 381 mayflies and found that these mayflies do not show any obvious directionality, although the rose diagram suggests a south-westerly trend that perhaps reflects the effect of a slight movement of the bottom water after accumulation of the carcasses," said ZHANG Qianqi.

Furthermore, all the mayflies are complete with body, appendages, and wings attached, which, when taken with the above, indicates that the mayflies were not transported any significant distance in the water after death and were buried in a low-energy, preservational environment.

Extant mayflies spend most of their life in the aquatic environment as nymphs, and adults commonly live from as little as 1–2 hours to a few days. During their short adult phase, males form dense aggregations and females must find mating partners while flying in and through large swarms, where they copulate and ultimately locate a suitable place to deposit eggs.

Mating-swarm behavior was previously known only in crown mayflies; however, the finding in this study reveals that such complex behaviors were already well established in stem-group mayflies by the Early Jurassic, representing the earliest evidence of mating-swarm behavior in insects.

Elemental energy spectroscopy and Raman component analysis showed that the Xiwan Biota fossils mainly coats with iron oxides and clay mineral residues, but the surface layer composition of the fossils was still dominated by carbon compounds.

Aquatic insects play an important role in aquatic food webs, acting as consumers of aquatic plants and animals. In return, they are consumed by fish and other predators. But aquatic insects can also be important parts of food webs on land when they emerge as adults from the water and fly to disperse and find mates. In addition to providing food bonanzas for predators, emerging insects can also have a fertilizing effect on plant communities next to lakes and streams when they die and decompose.

This study shows that some Jurassic mayflies emerged all at once in large swarms, representing a "pulse" of insects moving from the water to land. This pulse probably resulted in massive ecosystem fluxes in waterside habitats with impacts on basic ecology and biogeochemical cycling. Such a mechanism can play a substantial role in nutrient transport from aquatic ecosystems to surrounding terrestrial ecosystems, while this aquatic-terrestrial ecosystem linkage may be a key novelty in Mesozoic lacustrine ecosystems.

This research was supported by the Strategic Priority Research Program of the Chinese Academy of Sciences and the National Natural Science Foundation of China. 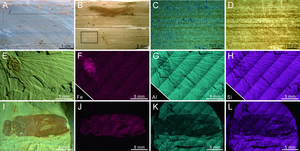 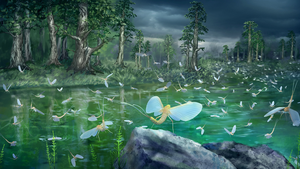 Reconstruction of the Early Jurassic ecosystem of the Xiwan Basin