The Wallacean islands have always been separated from Asia and Oceania by deep-sea waters. Yet, these tropical islands were a corridor for modern humans migrating into the Pleistocene Australia-New Guinea landmass (Sahul) and have been home to modern human groups for at least 47 thousand years. The archaeological record attests a major cultural transition across Wallacea that started around 3,500 years ago and is associated with the expansion of Austronesian-speaking farmers, who intermixed with local hunter-gatherer groups. However, previous genetic studies of modern-day inhabitants have yielded conflicting dates for this intermixing, ranging from 1,100 to nearly 5,000 years ago.

To shed light on the details of this expansion and the resulting human interactions, an international team of researchers analyzed DNA from 16 ancient individuals from different islands in Wallacea, greatly increasing the amount of ancient genomic data representing this region. “We found striking differences between regions in Wallacea and surprisingly, the ancestry of ancient individuals from the southern islands cannot be simply explained by admixture between Austronesian- and Papuan-related groups,” says Sandra Oliveira, one of the study’s lead authors.

While the identity of the people who spread this ancestry is still unclear, the discovery of the Mainland Southeast Asian ancestry and its possible antiquity in the southern Wallacean islands has major implications for the understanding of the Neolithic dispersals into Island Southeast Asia. “This finding is very important for the archaeologists in the region,” adds Toetik Koesbardiati, an Indonesian anthropologist involved in the study. He adds, “We will certainly intensify our efforts to study this migration with other lines of evidence.”

This work also revealed a closer relationship between the Austronesian-related ancestry of ancient individuals from northern Wallacea and the Pacific, compared to those from southern Wallacea - a pattern matched by linguistic evidence. Additionally, it shed light on the timing of the Asian-Papuan genetic admixture. “Previous studies based on present-day populations have reported widely different estimates, some of which preceeded the archaeological evidence for the Austronesian expansion, while others were much more recent. Since we now have ancient individuals from different time periods we can directly show that admixture occurred in multiple pulses or continuously since at least 3,000 years ago throughout Wallacea,” explains Mark Stoneking, a senior author of the study. He adds, “Future studies on older genomes might extend this date even further.”

The team also searched for genetic similarities between the newly reported ancient Wallaceans and a previously published pre-Neolithic individual from Sulawesi, another island in Wallacea. “All Wallacean individuals sequenced in this study are more similar to present-day New Guinean groups than to the earlier local population, suggesting that these two regions were more closely connected in ancient times than previously imagined,” says Cosimo Posth, another senior author of the study. He concludes, “These results also confirm that the genetic ancestry of Wallacean hunter-gatherers has been largely replaced.” 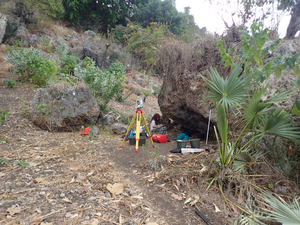