Practical fusion energy is not just a dream at the Department of Energy’s Oak Ridge National Laboratory. Experts in fusion and material science are working together to develop solutions that will make a fusion pilot plant — and ultimately carbon-free, abundant fusion electricity — possible.

As head of the lab’s Fusion Nuclear Science, Technology and Engineering Section, Chuck Kessel is familiar with the materials challenges that must be addressed to build a power plant. Kessel needed to look no further than Bruce Pint, head of ORNL’s Corrosion Science and Technology Group, for a collaborator.

Pint has been studying corrosion-resistant, high-temperature materials for power generation applications for decades. His work has focused mostly on gas-metal or alloy corrosion and oxidation for coal, gas and nuclear power plants. Examining corrosive liquids in the context of fusion energy represents a different and tougher challenge.

One critical challenge for fusion is how to produce and recover tritium, a heavy hydrogen isotope that, along with its lighter cousin deuterium, will serve as fuel for tomorrow’s fusion reactors.

In a fusion reaction, these isotopes are heated to Sun-like temperatures in a plasma where they collide to form helium and a neutron, releasing energy in the form of kinetic energy. By directing those speeding neutrons at the more common metal lithium, scientists can produce tritium within the reactor itself.

A promising strategy for producing tritium in a fusion reactor involves channeling liquid lead-lithium through the reactor “blanket” — the inner walls that are made of specialized steel with silicon carbide flow channel inserts. However, there’s a catch: The ongoing flow of lead-lithium will gradually eat away at the steel. Minimizing that corrosion is a crucial step for a viable fusion power plant.

“This type of blanket, with a liquid breeder flowing through it and corroding these materials, is fundamentally limited by this corrosion mechanism,” Kessel said.

Marie Romedenne, who studied liquid metals for her doctorate and joined ORNL in 2019, is helping Pint and learning more about the ORNL liquid metal experimental methods that have been used since the 1950s.

Many factors contribute to corrosion rates, including the composition of the exposed materials; how long it is exposed; how fast the liquid flows; the strong magnetic fields used to control and confine the plasma; the temperature; and impurities in the system. This corrosion challenge gave Pint and Romedenne the chance to chart out several experiments designed to detangle these factors while edging closer to the conditions of an actual fusion reactor.

The team built a series of flow loops that tested materials under various conditions, including temperatures up to 700 degrees Celsius. Inside the loop, the scientists inserted specimens of a steel similar to what would be used for components in a fusion device, plus specimens of silicon carbide. According to current fusion designs, the silicon carbide reduces the pressure drop in the lead-lithium flow by electrically isolating the fluid from the steel walls. This approach supports the three materials coexisting and interacting, with the lead-lithium mediating between the steel and silicon carbide.

After each 1,000-hour experiment, the specimens were tested to see if they had become brittle and how much mass had been lost to dissolution in the liquid lead lithium or, alternately, added by newly formed compounds.

In the first experiment, Pint and Romedenne found that iron and chromium from the steel were dissolving in the liquid, which then reacted with the silicon carbide samples to form intermetallic compounds, silicides, and iron and chromium carbides. As these newly formed compounds flowed through the loop, they accumulated on the silicon carbide samples in the cooler end of the loop, resulting in a relatively thick layer.

“It was actually pretty spectacular — a couple hundred microns thick,” Pint said. “I thought it might react a little bit. I didn't expect it to react that much.”

Pint and Romedenne also discovered that lowering the loop’s high temperature from 700 to 650 degrees Celsius resulted in a much slower buildup of the newly formed compounds.

“If you just have silicon carbide and you don't have a source of iron and chromium to put into the liquid, you won't see this reaction,” Pint said. “No one had put all the pieces together before.”

As iron and chromium reacted with the silicon carbide, the lead-lithium dramatically corroded the steel specimens. “They were barely there after the test was over,” he said.

In the second experiment, the team coated the steel with a thin layer of aluminum to protect it from the corrosive liquid, the first time this has been done in a flowing experiment. The results, Pint said, were encouraging.

“Corrosion is still happening, even when we tried to button up everything as much as possible,” Pint said. “But we got things down to a more manageable level. None of our coated steel specimens were degraded significantly.”

In upcoming experiments, Pint and Romedenne plan to use a thinner layer of aluminum to minimize how much of that element ends up in the system. They also plan to double the length of experiments to 2,000 hours to better study the growth of the reactant layer on the cold side of the loop.

To venture beyond the limits of their experimental loops, Romedenne is using models and simulations to predict the corrosion lifetimes of fusion materials at industrial durations — 50,000 hours or more. But continued experiments and new testing environments are needed to validate and improve these models.

Kessel is laying the groundwork now for development of an advanced flow loop, which would feature magnets to help measure the impact of magnetic fields on corrosion rates.

“We want to create as prototypical an environment as possible to allow us to identify, demonstrate and optimize actual solutions for a fusion pilot plant,” Kessel said.

This research was funded by the DOE Fusion Energy Sciences program.

Experts chip away at corrosion for the future of fusion 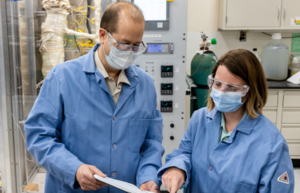