The brilliant and often iridescent colours that we see in some species of birds, beetles and butterflies arise from a regular arrangement of nanostructures that scatter selective wavelengths of light more strongly to generate colour. These colours are called structural colours, which usually range from blues to greens, and even magenta. However, vibrant or saturated reds are elusive and notably absent from the structural colour range in both natural and synthetic realms.

To achieve highly saturated reds, the material needs to absorb light from all wavelengths shorter than ~600 nm and reflect the remaining longer wavelengths, doing both as completely as possible. This sharp transition from absorption to reflection was prescribed theoretically by none other than Erwin Schrodinger of quantum theory fame. However, the physics of resonators tell us that high-order optical resonances in blue will also occur as soon as we have a fundamental resonance in red. This combination of blue and red thus results in the magenta observed in nature. It is therefore challenging to achieve the Schrödinger’s red pixel, which would produce the most saturated red in the world. Current nanoantenna-based approaches are insufficient to simultaneously satisfy the above conditions.

Researchers from the Agency for Science, Technology and Research’s (A*STAR) Institute of Materials Research and Engineering (IMRE), National University of Singapore (NUS) and Singapore University of Technology and Design (SUTD) have collaborated to design and realise reds at the ultimate limit of saturation as predicted by theory, where the team worked together on conceptualisation methodology, fabrications, characterisations and simulations. This research was published in Science Advances on 23 February 2022.

The design consists of regularly arranged silicon nanoantennas in the shape of ellipses. These produce possibly the most saturated and brightest reds with ~80% reflectance, exceeding the reds in the standard red, green and blue gamut (sRGB) and other well-known red pigments, e.g. cadmium red (see Fig 1 & 2 for more details).

The nanoantennas support two partially overlapping quasi bound-states-in-the-continuum modes, where the optimal dimensions of the silicon nanoantenna arrays are derived by using a gradient descent algorithm to enable the antennas to achieve sharp spectral edges at red wavelengths. At the same time, high-order modes at blue or green wavelengths are suppressed via engineering the substrate‑induced diffraction channels and the absorption of amorphous silicon.

Potential uses for Schrödinger’s red include developing a polarisation dependent encryption method, with plans to scale up the Schrödinger’s red pixel for applications like functional nanofabrication devices such as optical spectrometers and reflective displays with high colour saturation.

“With this new design that can achieve the most saturated and brightest reds, we can exploit its sensitivity to polarisation and illumination angle on potential applications for information encryption. This proposed concept and design methodology could also be generalised to other Schrödinger’s colour pixels. The highly-saturated red achieved could be potentially scaled up through methods such as deep ultraviolet and nano-imprint lithography, to reach the dimensions of reflective displays based on multilayer film configuration, which could lead to potential applications like compact red filters, highly saturated reflective displays, nonlocal metasurfaces, and miniaturised spectrometers”, said Dr. Dong Zhaogang, Deputy Department Head of Nanofabrication at A*STAR’s IMRE.

“The creation of the record-high saturation and brightness in red opens up possibilities for a plethora of applications related to anti-counterfeiting technologies, high-calibre colour display and more, which were previously perceived as unachievable with structural colour. It showcases a wonderful synergy between conceptual breakthrough, powerful algorithm and advanced nanofabrication”, said Prof. Cheng-Wei Qiu, Dean’s Chair Professor at NUS.

“This work in structural colours goes to show that we can sometimes outdo evolution through clever use of the tools in nanofabrication and accurate optical simulations”, said Prof. Joel Yang, Provost Chair Professor and Associate Professor in Engineering Product Development at SUTD. 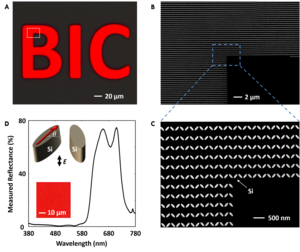 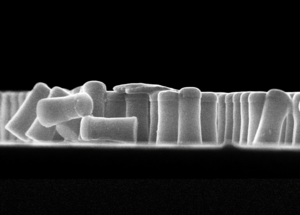