Initiated by Universities UK, Swiss Federal Institute of Technology Lausanne (EPFL), public research university ETH Zurich, the ETH Board, Wellcome and The Royal Society, the ‘Stick to Science’ campaign calls for an open, inclusive, and collaborative research and innovation landscape in Europe that is free from political barriers. The initiative comes off the back of uncertainties over the UK and Switzerland’s participation in Horizon Europe, the EU’s €95.5 billion research and innovation program. The UK’s relationship with Horizon Europe remains trapped in post-Brexit arrangements, while Switzerland is locked out of parts of the program, pending further government talks. In both cases, efficient science collaboration continues to be stalled by politics.

Switzerland and the UK, two of the best performing science systems in the world, are long-standing and academically important partners in Europe’s research and innovation landscape. However, some of the best minds of the British and Swiss institutions are currently unable to fully and efficiently contribute to Europe’s science and research as a result of the ongoing uncertainty.  These circumstances are hindering some of Europe’s top scientists from working together to tackle looming global challenges such as climate change, pandemics, sustainability, energy and food security.

Commenting on signing the initiative, Stephan Kuster, head of public affairs at Frontiers, says, “Scientists empower society and the ability to collaborate across borders is essential for this. As the 3rd most-cited publisher, Frontiers’ mission is to accelerate scientific discovery by making science open and we stand firmly for open and barrier-free collaboration among Europe’s research and innovation actors. We sincerely hope EU institutions, member states, and the governments of the UK and Switzerland recognize that advancement in R&I is best achieved when all actors in science work collaboratively together across geographic boundaries.”

Frontiers is the first publisher to sign ‘Stick to Science’ initiative 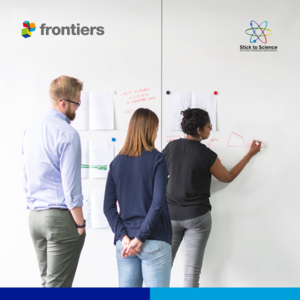 Frontiers is the first publisher to sign ‘Stick to Science’ initiative