ATHENS, Ohio (June 8, 2022) – An Egyptian-American team of researchers has announced the discovery of a new kind of large-bodied meat-eating dinosaur, or theropod, from a celebrated fossil site in Egypt’s Sahara Desert. The fossil of a still-unnamed species provides the first known record of the abelisaurid group of theropods from a middle Cretaceous-aged (approximately 98 million years old) rock unit known as the Bahariya Formation, which is exposed in the Bahariya Oasis of the Western Desert of Egypt.

In the early 20th century, this locality famously yielded the original specimens of a host of remarkable dinosaurs—including the colossal sail-backed fish-eater Spinosaurus—which were then destroyed in World War II. Abelisaurid fossils had previously been found in Europe and in many of today’s Southern Hemisphere continents, but never before from the Bahariya Formation. The team describes the Bahariya abelisaurid discovery in a paper published today in Royal Society Open Science.

The study was led by Ohio University graduate student Belal Salem, based on work he initiated while a member of the Mansoura University Vertebrate Paleontology Center (MUVP) in Mansoura, Egypt. The research team also included Ohio University Heritage College of Osteopathic Medicine professor of biomedical sciences Patrick O’Connor; Matt Lamanna, associate curator of vertebrate paleontology at Carnegie Museum of Natural History; Sanaa El-Sayed, a doctoral student at the University of Michigan and the MUVP’s former vice director; Hesham Sallam, a professor at the American University in Cairo (AUC) and Mansoura University and the founding director of the MUVP; and additional colleagues from Benha University and the Egyptian Environmental Affairs Agency.

The fossil in question, a well-preserved vertebra from the base of the neck, was recovered by a 2016 MUVP expedition to the Bahariya Oasis. The vertebra belongs to an abelisaurid, a kind of bulldog-faced, small-toothed, tiny-armed theropod that is estimated to have been roughly six meters (20 feet) in body length. Abelisaurids—most notably represented by the horned, demonic-looking Patagonian form Carnotaurus of Jurassic World and Prehistoric Planet fame—were among the most diverse and geographically widespread large predatory dinosaurs in the southern landmasses during the Cretaceous Period, the final time period of the Age of Dinosaurs. Along with Spinosaurus and two other giant theropods (Carcharodontosaurus and Bahariasaurus), the new abelisaurid fossil adds yet another species to the cadre of large predatory dinosaurs that roamed what is now the Egyptian Sahara roughly 98 million years ago.

“During the mid-Cretaceous, the Bahariya Oasis would’ve been one of the most terrifying places on the planet,” says Salem, a new student in the biological sciences graduate program at Ohio University. “How all these huge predators managed to coexist remains a mystery, though it’s probably related to their having eaten different things, their having adapted to hunt different prey.”

The new vertebra holds implications for the biodiversity of Cretaceous dinosaurs in Egypt and the entire northern region of Africa. It is the oldest known fossil of Abelisauridae from northeastern Africa, and shows that, during the mid-Cretaceous, these carnivorous dinosaurs ranged across much of the northern part of the continent, east to west from present day Egypt to Morocco, to as far south as Niger and potentially beyond. Spinosaurus and Carcharodontosaurus are also known from Niger and Morocco, and a close relative of Bahariasaurus has been found in the latter nation as well, suggesting that this fauna of large to gigantic theropods coexisted throughout much of northern Africa at this time.

How can the discovery of a single neck vertebra lead researchers to conclude that the fossil belongs to a member of Abelisauridae, a kind of carnivorous dinosaur that has never been found in the Bahariya Formation before? The answer is remarkably simple: it is virtually identical to the same bone in other, better-known abelisaurids such as Carnotaurus from Argentina and Majungasaurus from Madagascar. As coauthor and Salem’s graduate advisor Patrick O’Connor, who in 2007 published an exhaustive study of the vertebral anatomy of Majungasaurus, explains, “I’ve examined abelisaur skeletons from Patagonia to Madagascar. My first glimpse of this specimen from photos left no doubt about its identity. Abelisaurid neck bones are so distinctive.”

The Bahariya Oasis is renowned within paleontological circles for having yielded the type specimens (the original, first-discovered, name-bearing fossils) of several extraordinary dinosaurs during the early 20th century, including, most famously, Spinosaurus. Unfortunately, all Bahariya dinosaur fossils collected prior to World War II were destroyed during an Allied bombing of Munich in 1944.

As a graduate student in the early 2000s, study coauthor Matt Lamanna helped make the first dinosaur discoveries from the oasis since the infamous 1944 air raid, including the gargantuan sauropod (long-necked plant-eating dinosaur) Paralititan. “The Bahariya Oasis has taken on near-legendary status among paleontologists for having produced the first-known fossils of some of the world’s most amazing dinosaurs,” says Lamanna, “but for more than three quarters of a century, those fossils have existed only as pictures in old books.” Thankfully, discoveries made during recent expeditions led by researchers from AUC and MUVP—such as the new abelisaurid vertebra—are helping to restore the paleontological legacy of this classic site. These expeditions have recovered a wealth of additional fossils that the researchers plan to unveil in the near future.

As team member Sanaa El-Sayed, who co-led the 2016 expedition that collected the abelisaurid vertebra, explains, “This bone is just the first of many important new dinosaur fossils from the Bahariya Oasis.”

The Bahariya Formation holds promise to shed further light on mid-Cretaceous African dinosaurs and the vanished ecosystems in which they once lived. Unlike more thoroughly explored rocks of the same age in Morocco that tend to yield isolated bones, the Bahariya Formation appears to preserve partial skeletons of dinosaurs and other land-living animals with a relatively high degree of frequency. The more bones that are preserved within the skeleton of a given fossil backboned species, the more paleontologists can generally learn about it. The propensity of the Bahariya Oasis for producing associated partial skeletons suggests that much remains to be learned from this historic locality.

“In terms of Egyptian dinosaurs, we’ve really just scratched the surface,” notes study coauthor Hesham Sallam. “Who knows what else might be out there?” Recent efforts by Professor Sallam and his collaborators from around the planet are putting students from Egypt in lead roles in the research process. Both the field expedition that recovered the new abelisaurid fossil and the follow-up laboratory work were led by MUVP-based student researchers and contributing authors on the paper. “Working with MUVP and its faculty and students, like Belal Salem, continues to inspire me, as I see the next generation of paleontologists taking a prominent role in sharing their views on the history of our planet,” adds O’Connor.

Research on the new abelisaurid vertebra was supported by a field research grant to Matt Lamanna from the National Geographic Society’s Committee for Research and Exploration, grants to Hesham Sallam from Mansoura University and the American University in Cairo intramural grant program, and a grant to Patrick O’Connor from the National Science Foundation (EAR-1525915).

We declare we have no competing interests. 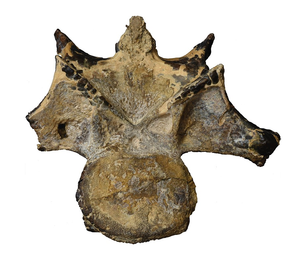 The abelisaurid neck vertebra from the Bahariya Oasis 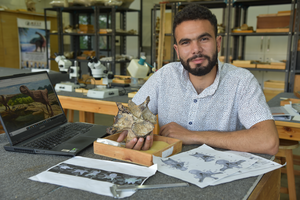