Carbon dots (CDs) are new carbon-based photoluminescence (PL) nanomaterials with a core-shell motif. Due to their fascinating advantages, such as chemical inertness, high quantum yields (QYs), high water solubility, thermal stability, and excellent biocompatibility, CDs have attracted extensive attention in various research applications, such as cancer diagnosis, phototherapy, and optoelectronic devices. However, the underlying PL phenomena of CDs remain a mystery due to the polydispersity of the products and the difficulty in ascertaining their atomic structures.

In a new paper published in Light Science & Application, a team of scientists, led by Professor Siyu Lu and Yuxi Tian from the College of Chemistry, Zhengzhou University, and School of Chemistry and Chemical Engineering,  Nanjing University, China, and co-workers have developed an innovative approach to investigate the formation process and fluorescence mechanism of o-phenylenediamine based red emission CDs. To this end, they designed six red emission CDs using different preparation methods, and all of them exhibited the same absorption and PL spectra after purification. The characterization of their structures by a series of tests shows that they have similar carbon core structures, while spectral characterization confirmed the different surface states of the CDs. Furthermore, transient absorption (TA) spectroscopy combined with single-particle PL spectroscopy technology confirmed that the red emission originated from the transition of different vibrational energy levels in the same PL center. Finally, theoretical calculations combined with thermogravimetric analysis confirmed the formation process of such CDs. Therefore, this work proposes a systematic way to analyze the emission mechanism of red emission CDs, which can be used as a guide for the analysis of the structure and mechanism of other types of CDs.

Further, these scientists confirmed their claims utilizing multiple characterizations: (1) The decay-dependent difference spectroscopy shows the same results of four samples, which proves that the photophysical processes are the same for all four CDs. The fitting results of the CDs were similar, and the carriers went through the same relaxation channel. (2) The single-particle PL spectra showed that all spectra of individual CDs were highly consistent with the ensemble spectrum, indicating that the multimodal emission of CDs originated from itself, rather than the superposition of multiple luminescent specie. (3) Temperature-dependent Raman spectroscopy directly prove that CDs are a new species, different from quantum dots and organic molecules, that possess the properties of both of these materials. (4) Density functional theory calculation shows in the hydrothermal process, oPD tends to aggregate and form planar structures. Then, the planar structures self-assemble to form spherical CDs.

"This article clarifies the general PL mechanism and formation process of oPD-based red emission CDs. This unified mechanism provides a new method for analyzing the structure-property relationship of CDs and thus paves the way for analyzing other types of CDs, thereby uncovering untapped opportunities". the scientists forecast. 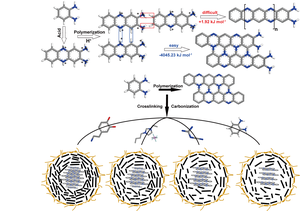