A recent study published in Cell Metabolism reported a specific cluster of neurons in the ventromedial hypothalamus (VMH) that express preprodynorphin (Pdyn) and can control homeostatic thermogenesis and social interaction-associated hyperthermia. This research identified Pdyn-expressing neurons in the VMH as a novel nucleus that not only responds to cold temperature in the environment and promotes homeostatic thermogenesis, but also modulates social interaction and associated thermogenesis.

This work was accomplished by the labs of Dr. ZHANG Zhe, Dr. LIANG Zhifeng, and Dr. XU Xiaohong at the Center for Excellence in Brain Science and Intelligence Technology (CEBSIT) of the Chinese Academy of Sciences.

As endotherms, birds and mammals can maintain their body temperature within a relatively stable range despite changes in environmental temperature. A proper and stable body temperature ensures efficient metabolism, which is important for survival, since a few degrees’ change in body temperature can produce severely debilitating effects. While previous research has identified some neural pathways critical for body temperature homeostasis, the exact cell types that control thermoregulation have remained elusive.

Early studies of the temperature regulation neural circuit showed that environmental temperature was sensed by thermoreceptors that separated on the skin and this information was transmitted to the hypothalamus through the spinal cord and midbrain. Pituitary adenylate cyclase-activating polypeptide (PACAP)/brain-derived neurotrophic factor (BDNF)-producing neurons in the preoptic area (POA) respond to warm environmental temperatures and mediate the decrease in body temperature.

Recent studies discovered that the bombesin-like receptor 3 (BRS3)-expressing neurons in the POA are capable of inducing thermogenesis, and the hypothalamus-projecting glutamatergic prefrontal neurons mediate stress-induced hyperthermia. However, the cell types involved in the cold-sensing function outside of the POA were largely unknown.

In order to systematically screen for brain regions sensitive to environmental temperature, the researchers applied an alternating hot or cold stimulus to head-restrained mice and monitored brain activity using an fMRI scanner. They found that the VMH exhibited the most robust cold-response, blood-oxygen-level-dependent (BOLD) signals (Fig. A). After the analysis of single-cell transcriptome data and fluorescence in situ hybridization, the researchers further discovered that Pdyn-expressing neurons in the VMH could be the candidate population for cold-sensitive neurons.

Researchers showed that VMHPdyn neurons are critical to maintaining body temperature in cold environments, thus adding an important piece to the neural circuit for thermoregulation. What’s more, this work discovered the dual function of VMHPdyn neurons in coordinating energy metabolism and social behaviors. 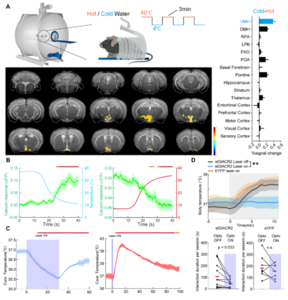