Today we commonly encounter contactless RFID chips in a number of products, but can similar technology be implemented at the molecular level? The answer is yes. The principle of molecular encoding conceived by Miloslav Polášek and his team at IOCB Prague represents a novel method on the frontier of chemistry and modern technologies. Their paper on paramagnetic encoding of molecules was recently published in the journal Nature Communications.

The new principle of molecular encoding and prototype of such a molecular system were initially only sci-fi ideas. After five years of development, the team succeeded in creating molecules with the right characteristics, the structure of which is suitable for incorporation of ions of rare-earth metal elements, so-called lanthanides. These elements have special paramagnetic properties that allow tuning the response of the molecule in a magnetic field. The response can serve as a carrier of digital information and, analogically to RFID chips, it can be read in the radiofrequency spectrum by means of nuclear magnetic resonance. Moreover, these molecular constructions can be further linked and combined to create an increasingly complex yet still readable signal with a higher capacity for digital information.

“In our paper for Nature Communications, we introduced the simplest possible system of two linked molecules, into which we inserted various combinations of atoms of two selected lanthanides, dysprosium and holmium. We showed that even with a primitive system like that, it is possible to create four unique signals and use them to generate fifteen different digital codes,” says Miloslav Polášek, head of the Coordination Chemistry Group at the Institute of Organic Chemistry and Biochemistry of the Czech Academy of Sciences / IOCB Prague. “That might not seem like much at first, but the number of codes grows dramatically as the number of elements is increased. Four elements provide 65,535 codes, and with only six we could, for example, label with unique codes all the euro banknotes currently in circulation. Considering that we can use twelve of these elements, we get a tool with immense potential.”

A molecular construction that allows incorporation of lanthanide atoms at precisely defined locations plays a key role. “Our group works with chelators, which are molecules that can form bonds with metal ions and enclose them in a structure that looks like a cage. We used an amino acid to link these metal-containing molecular cages, and we also linked another component to them that acts as a transmitter in the magnetic field and whose frequency depends on the type of the metal ions and their order,” explains Jan Kretschmer, a member of the team at IOCB Prague and a student at the Faculty of Science, Charles University.

Miloslav Polášek and his team are not the only ones interested in the use of molecules as information carriers; other researchers have primarily looked for ways inspired by biology, using for example DNA. The advantage of DNA is its ability to hold massive amounts of information in a single molecule. On the other hand, a big disadvantage is its complicated reading, which requires collection and manipulation of a sample, which moreover poses a risk of contamination with a different DNA from the surrounding environment. The fundamental advantage of paramagnetic molecular encoding is that the information can be read remotely. The reading process can be repeated indefinitely without any damage to the molecule or depletion. The information is stored permanently.

“When we submitted our paper to the journal the first time, one of the reviewers suggested that we provide a specific example of using the method. We took that as a challenge and performed two experiments. In the first one, we used our set of molecules to encode an image with the word ’CODE‘ inscribed in it, which we then read using magnetic resonance in collaboration with the team of Daniel Jirák of the Institute of Clinical and Experimental Medicine. In the second experiment, we used a slightly different method to encode the word ’Lanthanide‘ in the digital code,” adds Dr. Polášek. [See video: https://youtu.be/z1y18SZ-OTQ]

The current molecular system uses four different lanthanides and is reliably capable of 16-bit encoding; however, an optimized system using also the remaining lanthanides could, in principle, allow 64-bit encoding or even higher, and that would provide opportunities for applications in many areas. In principle, it is possible to label microscopic objects, such as cells, as well as macroscopic objects like drugs or banknotes. Miloslav Polášek’s team is planning applications in the coming years not only for chemistry and pharmacy but also for telemedicine and other sectors focusing on development of innovative technologies.

In addition to the teams at IOCB Prague and the Faculty of Science, Charles University, scientists from the Institute of Clinical and Experimental Medicine and the University of Chemistry and Technology, Prague also contributed to the research. Financial support was provided by the Czech Science Foundation (project no. 17-22834Y).

Miloslav Polášek, Ph.D. heads the Coordination Chemistry Group at IOCB Prague. In his research, he has long focused on compounds of so-called lanthanides, rare-earth elements, and their use in medicine and other industrial areas. In previous years, the team of Dr. Polášek succeeded in developing a new method for producing the radioactive isotope lutetium 177 to treat cancer. The patented method was licensed to the US company SHINE Technologies, which is using it to produce lutetium 177 on an industrial scale.

The Institute of Organic Chemistry and Biochemistry of the Czech Academy of Sciences / IOCB Prague is a leading internationally recognized scientific institution whose primary mission is the pursuit of basic research in chemical biology and medicinal chemistry, organic and materials chemistry, chemistry of natural substances, biochemistry and molecular biology, physical chemistry, theoretical chemistry, and analytical chemistry. An integral part of the IOCB Prague’s mission is the implementation of the results of basic research in practice. Emphasis on interdisciplinary research gives rise to a wide range of applications in medicine, pharmacy, and other fields. 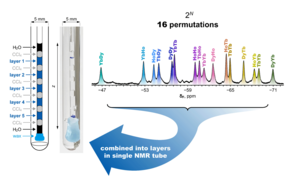 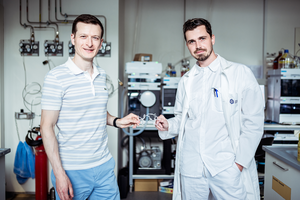