Boulder, Colo.: While much of public attention on Yellowstone focuses on its potential to produce large supereruptions, the hazards that are much more likely to occur are smaller, violent hydrothermal explosions. Hydrothermal explosions occur when near-boiling water suddenly flashes into steam, releasing large amounts of energy. The energy release fractures the rock downward, often leaving behind a crater. The same sources that can produce these explosions are what give Yellowstone its well-known hot springs, geysers, and fumaroles.

“The hydrothermal system in Yellowstone is the largest in the world and is driven by high heat flow over a large area, by high precipitation rates, and by active seismicity and deformation. Over 10,000 hydrothermal features are present in Yellowstone,” said Lisa Morgan, lead author of the study. “For this study, we wanted to know more about the recent geologic history of Yellowstone Lake and what role hydrothermal activity has had in the lake, especially the role of hydrothermal explosions and their triggering mechanisms.”

The research team collected sediment cores from across the northern portion of Yellowstone Lake and correlated them with cores that were previously collected in the vicinity, with the goal of characterizing their chemical and physical attributes and identifying hydrothermal explosion deposits in the cores.

The Mary Bay hydrothermal explosion occurred 13,000 years ago and resulted in a 2.5-km (1.5-mi) wide crater, which is partly submerged under the lake. While deposits from the Mary Bay explosion exposed on land had been previously studied, the sediment cores from the lake demonstrated that the extent of its deposits was larger than previously thought and that the lake level must have been lower at the time of the explosion.

The researchers concluded that the Mary Bay explosion was triggered by a sudden 14-m (46-ft) drop in lake level caused by a seismic event and a tsunami that eroded the outlet waterway of Yellowstone Lake.

Differing from how the Mary Bay Crater likely formed, the researchers determined that Elliott’s Crater formed when a seismic event fractured the dome cap of the hydrothermal system. In Yellowstone Lake, hydrothermal domes form when underlying pockets of gas or gas-charged fluids cause overlying sediments to arch upwards. Rupturing this dome would result in a sudden loss of pressure, triggering a hydrothermal explosion.

Many of the smaller deposits in the sediment cores were from previously unknown younger hydrothermal explosions. As has been consistent with previous studies of the explosion craters, there appears to be no relation between them and volcanic eruptions at Yellowstone.

“Given what we see from Yellowstone Lake and elsewhere in Yellowstone, hydrothermal explosions of various scales will continue to occur,” said Morgan.

GSA BULLETIN articles published ahead of print are online at https://bulletin.geoscienceworld.org/content/early/recent . Representatives of the media may obtain complimentary copies of articles by contacting Kea Giles. Please discuss articles of interest with the authors before publishing stories on their work, and please make reference to The Geological Society of America Bulletin in articles published. Non-media requests for articles may be directed to GSA Sales and Service, gsaservice@geosociety.org.

Yellowstone’s history of hydrothermal explosions over the past 14,000 years 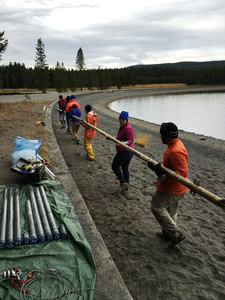 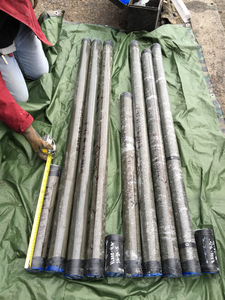 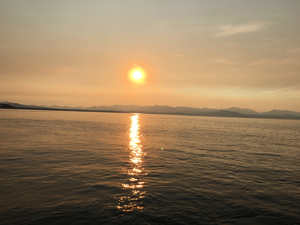