The research team first focused on their observation that silver vine leaves crumpled and torn by feline licking and chewing appeared to have a much stronger aromatic odor compared to intact leaves. They quantified the airborne emission and chemical profiles of iridoids that induce the feline response (such as nepetalactol, dihydronepetalactone, and isoiridomyrmecin) before and after feline licking and chewing. Physical damage of silver vine by cats promoted the immediate emission of total iridoids, which was 10-fold higher than from intact leaves. Leaf damage also changed the composition of iridoids in silver vine. Nepetalactol accounts for over 90% of total iridoids in intact leaves, but this drops to about 45% in damaged leaves as other iridoids greatly increase.

To examine whether these changes in iridoids when silver vine leaves are damaged influence the feline response, the research team prepared synthetic iridoid cocktails corresponding to the ratios found in intact versus damaged leaves, and presented these simultaneously to a set of cats. The altered iridoid mixture corresponding to damaged leaves promoted a much more prolonged response. “It was easy to speculate that the response duration would increase with the amount of iridoid. However, it was surprising that the change in iridoid composition when silver vine leaves were crumpled and torn by cats also greatly increased the cats’ response. The increased emission of iridoids from damaged leaves and changed chemical composition add together to induce a more extended duration of rubbing and rolling response, allowing cats to transfer more mosquito repellents to their fur. This helps to reduce the health risks and irritation associated with mosquitoes. We can say that licking and chewing these plant leaves also contributes to chemical pest defence in cats”, said Prof. Masao Miyazaki of Iwate University, a leader of the research project.

“We also examined whether feline licking and chewing of leaves has similar effects on the amount and composition of iridoids in the well-known cat attractant plant, catnip, as well as silver vine”, said Reiko Uenoyama, the paper’s first author. “Damaged catnip emitted 20-fold more total iridoids compared to intact leaves. However, in contrast to silver vine, leaf damage did not alter the composition of catnip iridoids. Both intact and damaged extracts of catnip consisted almost solely of nepetalactone, which is present at only very low levels in silver vine.”

Catnip and silver vine have been known as plants that are both unusually attractive to cats but are not closely related. These unrelated plants have evolved to produce very similar, but not identical iridoids as secondary plant metabolites. The research team suggests that the olfactory and behavioral sensitivity of cats to plant iridoids has been fine-tuned to show a prolonged characteristic response toward either a low level of complex iridoids emitted from damaged silver vine or a much higher level of nepetalactone emitted from damaged catnip. “Our findings highlight the possibility that plant-damaging behavior, which occurs alongside self-anointing, might play an important role in gaining pest-repellency in other animals as well as cats”, said Jane Hurst, the paper’s co-author at the University of Liverpool. “Our study has also provided valuable insight into how we can obtain potent natural repellents against pest insects from plants.”

Miyazaki and his colleagues are now examining the molecular mechanisms in the feline olfactory system that sense plant iridoids. Such studies promise to answer the key remaining questions of why this response is limited to Felidae species and why some cats do not respond to these plants.

Why do carnivorous cats lick and chew catnip and silver vine plants which are not food? 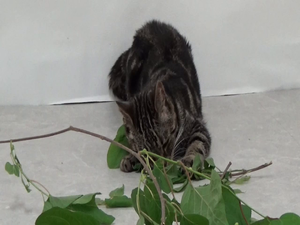 the video clip for explaining the paper