Genova (Italy), 15th June 2022 – Researchers at IIT-Istituto Italiano di Tecnologia (Italian Institute of Technology) and INAIL (Italian Worker’s Compensation Authority) designed and realized innovative prototypes of wearable robotic exoskeletons for industrial use that will help make work in the industrial and manufacturing sectors safer. By means of their electric motors and artificial intelligence algorithms, these wearable robotic devices will assist workers, both men and women, who are engaged in the most physically demanding tasks, significantly reducing the effort required by up to 40% and lowering the percentage of accidents at work and chronic occupational diseases. Researchers are starting to test the prototypes in real scenarios, and are planning to develop them further in order to reach the technological level required to bring them to the market in few years.

Researchers at IIT and INAIL are working together to find solutions that may help workers in the near future. They conceived and realized new wearable robotic technologies: the first one, named XoTrunk, provides support for the lower-back; the second one, XoShoulder, targets the shoulders; and the third one, XoElbow, reinforces the elbows. Researchers were able to study the distribution of forces and overexertion of the body while workers are executing specific tasks. Using this information, the exoskeletons design was meant to respond to those stresses, limiting possible musculoskeletal diseases. At the same time, researchers studied the interaction between the human body and the three exoskeletons, acquiring important information that will permit to improve the prototypes and make them ready for market launch.

The three prototypes resulted as part of the “Collaborative Cybernetic Systems” project carried out by IIT’s XoLab research team (Wearable Robots, Exoskeletons and Exosuits Laboratory) led by Jesús Ortiz, with cooperation and support from the INAIL Department of Technological Innovation and Safety of Plants, Products and Anthropogenic Installations led by Carlo De Petris.

XoTrunk was designed to reduce the strain of repetitive load-lifting actions for weights of up to 20 kg, and more generally it is dedicated to all those jobs that could fatigue the operator’s back. In addition, it is the only device of its kind that can also provide support for pulling operations, which are very common in the logistics sector. The exoskeleton, weighing 6.5 kg, is fitted with two electric motors with a total power of 200 Watts and a torque of 30 N/m each. XoTrunk can also be used in synergy with XoKnee, a soft exoskeleton that connects to the robot and offers the operator even greater support during repetitive load-lifting tasks.

XoShoulder was developed to meet the needs of people who exert their shoulders in the course of their daily work. The typical scenario is that of a mechanical workshop scenario where the operators are working under the vehicles placed on car lifts, being subject to shoulder fatigue because they have to hold heavy tools above shoulder level for prolonged periods of time. The prototype, which weighs about 7.7 kg and is equipped with two 70-watt motors with a torque of 12 N/m each, currently represents a unique design from the mechatronic and control point of view for what concerns active robotic devices for shoulder support.

XoElbow is a prototype that helps lifting weights close to the operator’s body. An example of its application could be lifting heavy tyres while they are being fitted to a car on an automotive lift. It is equipped with the same motors as XoShoulder and weighs about 7 kg. Similarly to XoShoulder, this device present unique characteristics in the field of exoskeletons.

All three wearable robots are made of engineering plastics and aluminium alloys, usually employed for aerospace applications, and they are designed for the principal industrial contexts in which operators, both male and female, are likely to put excessive stress onto their musculoskeletal systems: manufacturing, maintenance, food processing, logistics, construction, and agriculture.

These prototypes were designed to meet the needs of men and women at the workplace, using artificial intelligence algorithms to provide the appropriate assistance according to the type of work and the way in which it is performed. Another feature common to all these devices and fundamental for this type of equipment, is “transparency”. In fact, the robots should not hinder or limit mobility, but come into operation only for the most demanding tasks, providing support for the workers’ musculoskeletal system.

At present, XoTrunk is undergoing initial testing at selected companies for field trials and, by means of a IIT’s start-up project (Proteso) that has been launched this year, it is expected to be placed on the market over the next months. XoElbow and XoShoulder will start their real-life scenario testing over the next few months, and it is expected that they could be available on the market in the next few years.

Their practical applications without doubt include car repair shops. In fact, for the devices’ first preliminary field tests, the IIT research team had the opportunity of working with official sales and service dealership Mercedes-Benz Novelli 1934 S.r.l., part of the Biauto Group located in Genova (Italy). The company will consider the future involvement of its staff for the wearable robots’ testing phase.

IIT and INAIL: New prototype exoskeletons for workers in the future 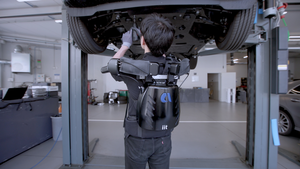 NEW PROTOTYPE EXOSKELETONS FOR WORKERS IN THE FUTURE