Initiating an immune response to viral infection begins with the detection of pathogen-associated molecular patterns (PAMPs) by pattern-recognition receptors (PRRs). RIG-I, MDA5, and cGAS are major PRRs that can sense viral nucleic acids. Since their activation is strictly regulated by polyubiquitination and deubiquitination, it is important to understand how RIG-I, MDA5, and cGAS are regulated by ubiquitinase and deubiquitinase.

A research group led by Prof. XIAO Wuhan from the Institute of Hydrobiology (IHB) of the Chinese Academy of Sciences recently found that the deubiquitinase OTUD3 prompts a different immune response depending on whether it is responding to an RNA or DNA virus. In the former case, OTUD3 limits RNA virus-triggered innate immunity, whereas in the latter case it promotes DNA virus-triggered innate immunity. The results were published in Cell Reports.

In this study, the researchers first used ubiquitination assays and found that overexpression of OTUD3 diminished K63-linked polyubiquitination of RIG-I and MDA5 simultaneously. “It indicated that OTUD3 is a negative regulator in innate immunity mediated by RIG-I and MDA5,” said Prof. XIAO.

The researchers subsequently detected the effect of OTUD3 in DNA virus-triggered innate antiviral signaling. “What we found interesting is that OTUD3 is a positive regulator in response to DNA virus infection, and OTUD3 can interact with cGAS and catalyzed the removal of K48-linked polyubiquitin chains,” said Prof. XIAO.

To further clarify the mechanism of OTUD3 in DNA virus-triggered innate antiviral signaling, the researchers performed mutation and ubiquitination assays, which showed that OTUD3 cleaved K48-linked polyubiquitination chains from Lys279 of cGAS. It then promoted the DNA-binding ability of cGAS and protected cGAS from degradation.

This study revealed that OTUD3 plays different roles in innate immunity depending on whether it is responding to infection by an RNA or DNA virus, thus highlighting the complexity of the host antiviral response. 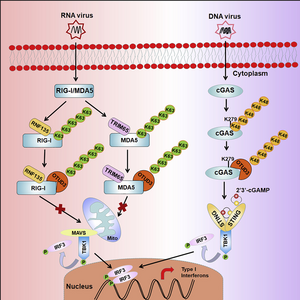