Pasadena, CA— A detailed analysis of the composition and motion of more than 500 stars revealed conclusive evidence of ancient a collision between Andromeda and a neighboring galaxy. The findings, which improve our understanding of the events that shape galaxy evolution, were presented by Carnegie’s Ivanna Escala Monday at the meeting of the American Astronomical Society.

Galaxies grow by accreting material from nearby objects—other galaxies and dense clumps of stars called globular clusters—often in the aftermath of a catastrophic crash. And these events leave behind relics in the form of stellar associations that astronomers call tidal features. This can include elongated streams or arcing shells moving around the surviving galaxy. Studying these phenomena can help us understand a galaxy’s history and the forces that shaped its appearance and makeup.

“The remnants of each crash can be identified by studying the movement of the stars and their chemical compositions. Together this information serves as a kind of fingerprint that identifies stars that joined a galaxy in a collision,” Escala explained.

She and her collaborators—Karoline Gilbert and Mark Fardal of the Space Telescope Science Institute, Puragra Guhathakurta of UC Santa Cruz, Robyn Sanderson of the University of Pennsylvania, Jason Kalirai of Johns Hopkins Applied Physics Laboratory, and Bahram Mobasher of UC Riverside—studied 556 red giant branch stars in a physical feature of Andromeda called the Northeast shelf, which forms a sharp ledge in the density of the galaxy’s material.

“We performed the first detailed characterization of the chemical composition and geometric motion of the stars in this region of our neighboring galaxy, demonstrating conclusively that the NE shelf is a tidal shell predominately composed of debris from the aftermath of a collision,” Escala explained.

Their work also demonstrates that the NE shelf is part of a multi-shell system with the galaxy’s West and Southeast shelves and that the material in these regions is consistent with that of Andromeda’s Giant Stellar Stream, linking all of these tidal features as potentially originating from the same source.

“Our results are in line with modeling that predicted the Giant Stellar Stream is the first loop of material from a collision and the NE shelf is the second layer wrap-around,” Escala concluded.

This level of analysis confirms predictions about Andromeda’s violent past and informs astronomer’s understanding of how material accreted by collisions shapes a galaxy’s surrounding features and evolutionary history.

This work was supported by a Carnegie Princeton Fellowship, the U.S. National Science Foundation, NASA, the Research Corporation for Scientific Advancement’s Scialog fellows program on Time Domain Astronomy, and from the Space Telescope Science Institute. 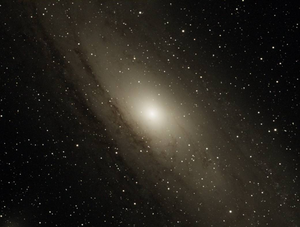