Compact terahertz (THz) functional devices are greatly sought after for high-speed wireless communication, biochemical sensing, and non-destructive inspection. However, controlled THz generation, along with transport and detection, has remained a challenge especially for chip-scale devices due to low-coupling efficiency and unavoidable absorption losses. To address this challenge, a new paper published in Light Science & Application, by a team of scientists, led by Professor Jingjun Xu and Zhigang Chen from the MOE Key Laboratory of Weak-Light Nonlinear Photonics, TEDA Institute of Applied Physics and School of Physics, Nankai University, Tianjin 300457, China, and co-workers have demonstrated nonlinear generation and topologically tuned confinement of THz waves in an engineered lithium niobate chip forming a wedge-shaped Su-Schrieffer-Heeger lattice. Such topological control of THz waves may bring about new possibilities in the realization of THz integrated circuits, promising for advanced photonic applications.

The experiment results show topologically tuned THz-wave confinement in a single photonic chip, as they stated in the text:

“The above experimental results clearly demonstrate that the generated THz waves can be strongly confined near the center defect in both the L-LD and S-SD regions (Fig. 2, second row) away from the transition point (marked in Fig. 1b). The significant difference between these two regions is that the localization of 0.3 THz in the L-LD (marked as A, B in Fig. 2) has topological protection, whereas the observed localization of 0.42 THz in the S-SD (marked as D, E in Fig. 2) results from trivial defect modes. Upon nonlinear excitation, the THz waves are generated and switched from a topological defect mode to a bulk mode, and then to a trivial defect mode, exhibiting tunable confinement as well as the THz topological mode population along the LN chip.”

They have further analyzed the distinction between topologically nontrivial and trivial defect modes:

“For the L-LD case, the eigenvalue of a topological defect mode is robust and isolated from the bulk modes under perturbations (Fig. 3a1). In the S-SD structure, even though a topological mode is still robust, the trivial defect mode excited in Figs. 2d, e is severely affected by perturbations (Fig. 3b1). Direct comparison of numerically simulated x-t diagrams and the differences in the corresponding spectra of the THz field between the L-LD and the S-SD structures under perturbations also confirm the features typically associated to topological protection, as shown in Figs. 3a2, a3 and Figs. 3b2, b3. Therefore, the topological structures can be employed to suppress or eliminate scattering loss and decay of the THz waves. As shown in Fig. 3c, even at a high perturbation ratio (60%), the THz field confinement still persists due to the robustness of the nontrivial topological mode. On the other hand, under the same experimental conditions (see the Supplementary Information for detail), half of the perturbation sets show coupling between the trivial defect mode and the bulk mode. ”

More details can be found in the text. 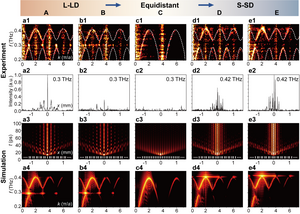 Fig. 2. Experimental (top two rows) and numerical (bottom two rows) demonstrations of topologically controlled THz confinement in the LN chip from L-LD though equidistant, and then to S-SD regions of the wedge-shaped SSH photonic lattice.