The European Gaia space mission has produced an unprecedented amount of new, improved, and detailed data for almost two billion objects in the Milky Way galaxy and the surrounding cosmos. The Gaia Data Release 3 on Monday revolutionizes our knowledge of the Solar System and the Milky Way and its satellite galaxies.

The Gaia space mission of the European Space Agency ESA is constructing an ultraprecise three-dimensional map of our Milky Way galaxy, observing almost two billion stars or roughly one percent of all the stars in our galaxy. Gaia was launched in December 2013 and has collected science data from July 2014. On Monday, June 13, ESA released Gaia data in Data Release 3 (DR3). Finnish researchers were strongly involved in the release.

Gaia data allows, for example, for the derivation of asteroid and exoplanet orbits and physical properties. The data helps unveil the origin and future evolution of the Solar System and the Milky Way and helps understand stellar and planetary-system evolution and our place in the cosmos.

Gaia revolves about its axis slowly in about six hours and is composed of two optical space telescopes. Three science instruments allow for accurate determination of stellar positions and velocities as well as the spectral properties. Gaia resides at about 1,5 million kilometers from the Earth in the anti-Sun direction, where it orbits the Sun together with the Earth in the proximity of the so-called Sun-Earth Lagrange L2-point.

Gaia DR3 on June 13, 2022 was significant across astronomy. Some 50 scientific articles are being published with DR3, of which nine articles have been devoted to underscoring the exceptionally significant potential of DR3 for future research.

The new DR3 data comprises, for example, the chemical compositions, temperatures, colors, masses, brightnesses, ages, and radial velocities of stars. DR3 includes the largest ever binary star catalog for the Milky Way, more than 150 000 Solar System objects, largely asteroids but also planetary satellites, as well as millions of galaxies and quasars beyond the Milky Way.

-There are so many revolutionary advances that it is difficult to pinpoint a single most significant advance. Based on Gaia DR3, Finnish researchers will change the conception of asteroids in our Solar System, exoplanets and stars in our Milky Way galaxy, as well as galaxies themselves, including the Milky Way and its surrounding satellite galaxies. Returning to our home planet, Gaia will produce an ultraprecise reference frame for navigation and positioning, says Academy Professor Karri Muinonen from the University of Helsinki.

In the conventional computation of an asteroid’s orbit, the asteroid is assumed to be a point-like object and its size, shape, rotation and surface light scattering properties are not taken into account. The Gaia DR3 astrometry is, however, so accurate that the angular offset between the asteroid’s center of mass and the center of the area illuminated by the Sun and visible to Gaia must be accounted for. Based on Gaia DR3, the offset has been certified for asteroid (21) Lutetia (Figure 2). The ESA Rosetta space mission imaged Lutetia during the flyby on July 10, 2010. With the help of the Rosetta Lutetia imagery and ground-based astronomical observations, a rotation period, rotational pole orientation, and detailed shape model were derived. When the physical modeling is incorporated into orbit computation, the systematic errors are removed and, contrary to conventional computation, all observations can be incorporated into the orbit solution. Consequently, the Gaia astrometry provides information about the physical properties of asteroids. These properties need to be taken into account using physical models or empirical error models for the astrometry.

The Gaia DR3 includes, for the first time, spectral observations. The spectrum measures the color of the target, meaning the brightness at different wavelengths. One especially interesting feature is that the new release contains about 60 000 spectra of asteroids in our Solar System (Figure 3). The asteroid spectrum contains information on their composition and, thus, about their origin and the evolution of the whole Solar System. Before the Gaia DR3, there has been only few thousand asteroid spectra available, so Gaia will multiply the amount of data by more than an order of magnitude.

Gaia is expected to produce detections of up to 20 000 giant exoplanets by measuring their gravitational effect on the movement of their host stars. This will enable finding virtually all Jupiter-like exoplanets in the Solar neighbourhood over the coming years and determining how common are Solar System -like architectures. The first such astrometric Gaia detection was a giant exoplanet around epsilon Indi A, that corresponds to the nearest Jupiter-like exoplanet only 12 light years away. The first such detections are possible because acceleration observed in radial velocity surveys can be combined with movement data from Gaia to determine the orbits and planetary masses.

The microarcsecond resolution of Gaia DR3 provides precise measurements of the motions of stars, not only within our own Milky Way galaxy, but also for the many satellite galaxies that surround it. From the motion of stars within the Milky Way itself, we can accurately measure its mass, and together with the proper motion of satellites, we can now accurately determine their orbits. This lets us look both into the past and into the future of the Milky Way galaxy system. For example, we can find out which of the galaxies that surround the Milky Way are true satellites, and which are just passing by. We can also investigate if the evolution of the Milky Way conforms to cosmological models, and in particular, whether the satellite orbits fit the standard dark matter model.

The International Celestial Reference Frame, ICRF3, is based on the position of a few thousand quasars determined by Very Long Baseline Interferometry (VLBI) at radio wavelengths. ICRF3 is used to obtain the coordinates of celestial objects and to determine the orbits of satellites. Quasars of ICRF3 are also fixed points on the sky that can be used to determine the precise orientation of the Earth in space at any time. Without this information, for example, satellite positioning would not work.

Gaia's data contain about 1,6 million quasars, which can be used to create a more accurate Celestial Reference Frame in visible light replacing the current one. In the future, this will have an impact on the accuracy of both satellite positioning and measurements of Earth-exploring satellites.

-The importance of DR3 and future data releases is in the improved accuracy due to increased data, summarizes Professor Markku Poutanen from the National Land Survey of Finland.

Recordings of the University of Helsinki Gaia DR3 press event: 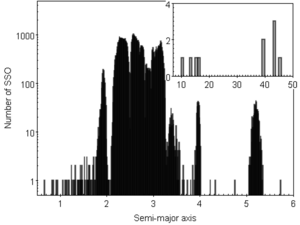 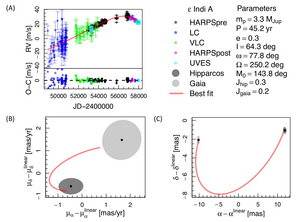