Grenoble, 23 June 2022 - The Jurassic cephalopod Vampyronassa rhodanica, thought to be the oldest known ancestor of the modern-day vampire squid (Vampyroteuthis infernalis), was likely an active hunter - a mode of life that is in contrast with its opportunistic descendant. Scientists led by Sorbonne University came to this conclusion after analysing microtomographic data of this rare fossil, acquired at the ESRF and the Muséum national d’Histoire naturelle in Paris. The results are published in Scientific Reports.

Vampyronassa rhodanica is thought to be one of the oldest relatives of the modern-day vampire squid (Vampyroteuthis infernalis), which is the only remaining living species of its family. This modern form lives in extreme deep ocean environments, often with little oxygen, and feeds on drifting organic matter. Like V. infernalis, the body of V. rhodanica was mostly made of soft tissue. As this rarely fossilises, little is known about the physical characteristics and evolutionary history of this family.

Despite the scarcity of fossil material from this family, Alison Rowe, from Sorbonne University and colleagues were able to study 3 well-preserved V. rhodanica specimens from La Voulte-sur-Rhône (Ardèche, France), dating to more than 164 million years ago. The eight-armed specimens were small, measuring around 10 cm in length, and had elongated oval-shaped bodies with two small fins.

They took them to the ESRF for non-destructive 3-D imaging: “We used synchrotron tomography at the ESRF in order to better identify the outlines of the various anatomical features”, says Rowe. However, the task was challenging, as Vincent Fernández, scientist at the ESRF, explains: “The fossils are on small slabs, which are very difficult to scan. On top of that, soft tissues are preserved but we needed phase contrast imaging to visualise the faint density variation in the data. The coherence of ESRF beamline ID19 was therefore very important to perform propagation phase-contrast computed-tomography and track all the minute details, such as the suckers and small fleshy extensions, called cirri”.

The presence of muscular suckers on each of the arms and sensory conical appendages for detecting prey suggests that V. rhodanica was likely an active predatory hunter. This is in contrast with its more opportunistic descendant the vampire squid, which has adapted to a low energy, deep ocean lifestyle.

It sucked to be the prey of ancient cephalopods 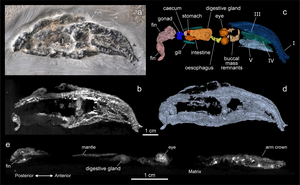