Thanks to the connectivity of the internet, scientists undoubtedly benefit from having a possibility to collaborate remotely on projects with others across the globe. To brainstorm, share results, to bounce ideas and get feedback. But now that the world reopens and travel is possible again, there is nothing like meeting in person! Against this backdrop, young scientists and Nobel Laureates meet for a week in Lindau, Germany, on Lake Constance.

"Current world events are putting scientific cooperation to the test: whether in cooperation on the European continent, with regard to Russia, or elsewhere. Nevertheless, the Lindau Meetings stick to the international, personal exchange. With the 71st edition, we are once more offering the next generation of top international researchers a unique opportunity here at Lake Constance: to benefit first-hand from the life experience of many Nobel Laureates and at the same time to expand their worldwide network for their own future."

Top-Level Guests at the Opening

Bettina Stark-Watzinger, Federal Minister of Education and Research, emphasises in her speech in Lindau:

"Cutting-edge research thrives on global networks. Bringing together the perspectives and knowledge of researchers from different nations provides the basis for finding good solutions to global challenges. As an international forum of exchange, the Nobel Laureate Meetings in Lindau play a unique role in these endeavours. Not only do they build major bridges between nations, but they also establish networks that span generations.

The Federal Government is glad to support these meetings. Of course, we are pleased that the Nobel Prize in the past two years has been awarded to three scientists from Germany for their achievements in physics and chemistry. This underscores the important role our country plays in global science."

Markus Blume, Bavarian State Minister for Science and the Arts, on the occasion of the 71st meeting opening in Lindau on Lake Constance in Bavaria:

"We are very pleased to host the world of science in Bavaria again this year! The Lindau Nobel Laureate Meetings offer outstanding young researchers a unique platform for exchange and networking with the top elite of Nobel Laureates from all over the world. Inspiration for innova­tion: Bavaria is exactly the right place for this. With our 3.5 billion ‘High-Tech Agenda Bavaria’, we invest in future and progress – and thus in the young generation. We further expand conditions for innovative research which are excellent already today and set up Bavaria as a world-class science location in the years to come. Welcome to Bavaria!"

The 70th anniversary meeting last summer had been held as an online version and was also a success. But all those involved are looking forward to the fact that finally the meeting can take place in Lindau again – some of the invited young scientists have been anticipating this for two years. “Science is about collaboration, working together. That’s what we need more of in this world”, claims Bowen Ding, one of the young scientists. Researchers from the field of chemistry had already been selected for the interdisciplinary meeting in 2020. Now they finally have the chance to experience the Lindau Spirit.

Following the meeting's topic rotation, this year’s six-day programme is dedicated to chemistry. In line with the current 2021 Nobel Prize in Chemistry, catalysis and synthesis form a core topic, especially organocatalysis, whose environmentally friendly processes make it particularly attractive. Other topics include new functional molecules, as well as their design and structure prediction using artificial intelli­gence. In line with their mission, the meeting will once again take up topics from the area of "Science in Society", this year with a focus on trust in science as well as diversity in research.

Sir David MacMillan will kick off the scientific programme on Sunday with his first lecture in Lindau. His Co-Laureate of 2021, Benjamin List, will also come to Lindau. In total, four Nobel Laureates will be taking part in the meeting for the first time and will be honored on the Lindau Nobel Laureate Pier – as 400 Laureates have been before. This year's host country is the United Kingdom, which will present its research activities during the International Day, traditionally the Monday of the week.

Until Friday, 1 July, the participating Nobel Laureates and young scientists will have ample opportunity for intensive exchange with each other at Lake Constance. Various programme formats such as Agora Talks, Laureate Lunches and Science Walks promote personal dialogue.

For young scientists and guests who are still unable or unwilling to travel due to the pandemic, the programme will be streamed live world­wide. Five Nobel Laureates will participate in the meeting online. An online platform will allow remote participants to also ask questions and thus participate as actively as possible in the programme. In addition, social events will be broadcast.

If you have any questions, please do not hesitate to contact the communications team:

About the Lindau Nobel Laureate Meetings

Since their foundation in 1951, the Lindau Nobel Laureate Meetings
have developed into a unique international scientific forum. The annual Meetings provide an opportunity for an exchange between different generations, cultures and disciplines. The theme of the Lindau Meetings alternates between Physics, Chemistry or Physiology and Medicine – the three Nobel Prize scientific disciplines. Every five years an interdisciplinary Meeting takes place, while the Lindau Meeting on Economic Sciences is held every three years. Through the medium of various declarations (2020 for Open Science, 2015 on Climate Change, 1955 Against the Use of Nuclear Weapons) the scientists have repeatedly joined in the public debate with political appeals.

It was the Lindau physicians Franz Karl Hein and Gustav Wilhelm Parade who approached Count Lennart Bernadotte af Wisborg with the idea of a conference of Nobel Laureates and proceeded to jointly implement this with him – since 1953 with the participation of young scientists. Some 35,000 students, PhD candidates and post-docs have since taken part. Their experience of the Meeting may be literally once-in-a-lifetime, but they remain permanent members of the Lindau Alumni Network and ambassadors for scientific dialogue.

All year long the Lindau Nobel Laureate Meetings continue to pursue their ‘Mission Education’ aimed at emphasising the importance of science and advocating science and research. This is also the purpose
of the Lindau Online Mediatheque as a learning platform with teaching materials for schools. 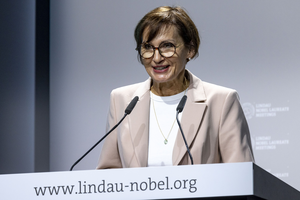 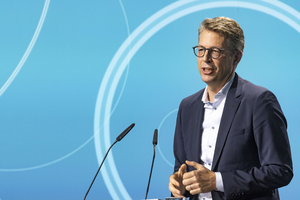