Michigan State University’s renowned Long-Term Evolution Experiment – a remarkable 34-year biological drama in flasks, with bacteria competing for resources and fighting for dominance – is itself evolving.

The bacteria’s main stage – frozen vials containing some 75,000 generations– has been moved from MSU’s Biomedical and Physical Sciences Building to Texas. Richard Lenski, its scientific founder and gamemaster, is passing its care and feeding on to a former Michigan State postdoctoral researcher.

Yet the bookends of news articles in high-profile international science magazines this month signal that MSU’s future with the LTEE is less about glowing obituaries and more about chapters still being written.

Lenski wryly documented the migration of his microbial colleagues on his @RELenski Twitter account, “Bon voyage, #LTEE! Enjoy your new locale, even if your Erlenmeyer flask homes and DM25 diets are exactly the same as you've been evolving in and adapting to for the last 75,000 generations! Now keep on evolving, my friends -- bacteria and humans alike!”

The experiment was started in 1988 by Lenski, the John Hannah Distinguished Professor of Microbial Ecology in the MSU College of Natural Science. He began with 12 populations of Escherichia coli (E. coli) bacteria—identical ancestral strains placed into identical environments—to see how similarly or differently they would evolve. For years he and his team fed them and protected their tiny universes from disruptions. In return, the bacteria reproduced quickly, allowing evolutionary-minded scientists to ask questions about evolution that would take many human lifetimes to provide.

The LTEE has resulted in the publication of more than 100 scientific papers documenting changes large and small in the bacteria – their competitive ability, size and shape, and the sequence of their genomes — findings now widely reported in textbooks, popular books by science writers, and in the media.

This month, the Lenski lab carefully packed up the latest samples from 75,000 generations of evolution to ship to the laboratory of Jeffrey Barrick, an evolutionary biologist at the University of Texas at Austin who first worked on the experiment as a postdoc in Lenski’s lab from 2006 to 2010.

Nature, an international science journal, covered the move of what they termed a “legendary” experiment with a Q&A with Lenski and Barrick. A week later, New Scientist published results by Lenski lab postdoctoral researcher Minako Izutsu, crediting a spin-off experiment with “settling (a) long-term evolution mystery.”

The latest work addressed the long-standing debate in biology about the relative importance of existing variation versus new mutations in evolution. Izutsu and Lenski put that question to the test in a new evolution experiment with bacteria that ran for 2,000 generations. They found that new mutations began to dominate evolution after only about 50 generations – just a week or so for E. coli – and the effects of the initial variation on the bacteria’s competitiveness was erased by 500 generations.

The New Scientist piece underscores that, while some of the day-to-day toiling to feed and care for the storied bacteria has been passed along to the next generation, the curiosity that is the scientists’ lifeblood remains strong.

“While the daily propagation of the LTEE is moving to Texas, we’ve still got copies of all of the samples here, and lots of plans and ideas for studying them, both here in my lab as well as with collaborators around the world,” Lenski said.

Then he picks up speed: after admitting to Nature that at 65 it seemed prudent to pass the baton to a younger group, it’s clear the ideas aren’t slowing.

Lenski said he and MSU instructor Michael Wiser are planning to update their analyses of the fitness trajectories through the latest 75,000-generation samples of the LTEE. And they’ll be running computer simulations and analyzing mathematical models to better understand those fitness trajectories with PhD student Devin Lake.

“And we've got lots of other projects going on as well,” he said. “We’re following up on Minako’s latest experiment by sequencing and analyzing the evolved genomes to dig deeper and better understand her exciting results."

Zachary Blount is a research assistant professor in MSU’s department of microbiology and molecular genetics. Blount is examining bacterial strains that use different transporters to take up citrate from the environment. One of the LTEE lines unexpectedly evolved the ability to consume citrate, and that discovery generated public interest as well as lots of new scientific questions. Lenski says that “Zack is using those strains to study the physiological and ecological effects of the bacteria consuming citrate, and how those effects would change if the bacteria had evolved to use citrate in a different way from the one that actually happened in the LTEE.”

The long list of current projects and questions makes it easy to conclude that long-term evolutionary experiments never really go away, they simply keep on evolving.

Lenski, along with Izutsu and Lake, are members of MSU'S Ecology, Evolution, and Behavior Program. The work is supported by the National Science Foundation.

MSU’s famous evolution-in-a-flask experiment moves, but not the science 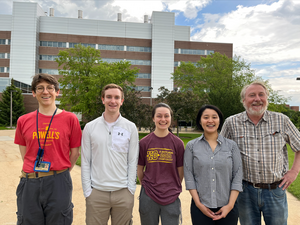 World in a flask