A dramatic outbreak of kelp-eating sea urchins along the Central Coast of California in 2014, leading to a significant reduction in the region’s kelp forests, was driven primarily by the emergence of sea urchins from their hiding places rather than an increase in the urchin population. In subsequent years, sea urchin movements enabled kelp forest recovery at sites that had been denuded “urchin barrens.”

Those are among the key findings of a long-term study of sea urchins and kelp forest dynamics in Monterey Bay conducted by scientists at the University of California, Santa Cruz. Published June 29 in Ecology Letters, the new findings could be helpful in efforts to restore decimated kelp forests along the California coast, said Joshua Smith, who led the study as a Ph.D. student at UCSC and is now a postdoctoral researcher at the National Center for Ecological Analysis and Synthesis at UC Santa Barbara.

“As people are thinking about practical ways to facilitate kelp forest recovery, most people would agree we need to reduce the number of sea urchins, but it’s also really important to consider the role of sea urchin behavior,” Smith said.

Smith and coauthor Tim Tinker, an adjunct professor of ecology and evolutionary biology at UCSC, used 22 years of long-term monitoring data to show that the 2014 outbreak of purple sea urchins in southern Monterey Bay was primarily driven by a behavioral shift, not by a population increase.

Over the next three years, they tracked the foraging behavior of sea urchins in the area, which had become a patchy mosaic of kelp forests and urchin barrens. They found that sea urchin behavior was linked to transitions between the two states in both directions.

A series of major disruptions to California’s kelp forest ecosystems began in 2013 with the emergence of sea star wasting disease, which wiped out a sea urchin predator, the sunflower sea star. The next year an extraordinary marine heatwave bathed the coast in warm water, creating poor conditions for the growth of kelp. That set the stage for the unprecedented outbreak of sea urchins. All of a sudden, the rocky reefs where kelp forests grew were covered with purple sea urchins grazing on the living kelp.

Normally, Smith explained, sea urchins hide from predators in the cracks and crevices of the rocky reef and feed on kelp detritus that drifts their way on the currents. With reduced kelp productivity due to the warm water, the usual food deliveries weren’t happening, while at the same time a known sea urchin predator had disappeared.

“In 2014, they came storming out of the crevices looking for kelp,” Smith said. “These were big adult sea urchins that showed up all of a sudden, especially in central and northern California, and that behavioral shift here along the Monterey Peninsula led to these urchin barrens where there had been kelp forest.”

In a previous study, Smith and coauthors showed that sea otters were crucial to maintaining patches of healthy kelp forest in Monterey Bay by preying on sea urchins. In northern California, where there are no sea otters, the kelp forests are almost entirely gone.

Nevertheless, the researchers found that kelp forests can recover if sea urchins move off of a reef. In 2018, for example, they went out to a site that had been an urchin barren the previous year and found a kelp forest. The sea urchins had moved away from the reef, which they had stripped of kelp, into shallower water where there was an abundance of red foliose algae.

“They prefer kelp, but they had eaten all the kelp, so they moved up into shallower water and that allowed the kelp to regrow on the deeper reef,” Smith said. “Interestingly, the kelp that came back was bull kelp, not the giant kelp that is typically dominant on the central coast.”

He noted that water conditions this year are excellent for kelp growth. An unusually windy spring has driven strong upwelling of cold, nutrient-rich water along the coast.

“We’re all waiting to see how that impacts kelp recovery,” Smith said. “There are just a lot more sea urchins now out on the reefs actively grazing, so we need to consider how we might get their numbers back down and enough predation to drive them back into the crevices.” 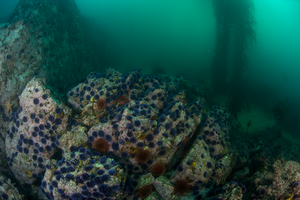 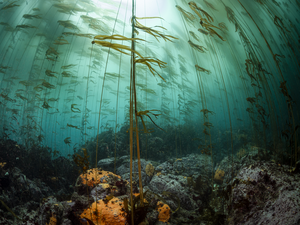 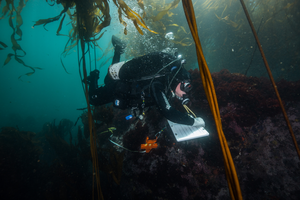