HOUSTON – (June 27, 2022) – Two Rice University nuclear physicists have received Department of Energy backing to continue their research on the fundamental properties of matter in extreme conditions.

Frank Geurts, and Wei Li, both members of Rice’s T.W. Bonner Nuclear Laboratory, won a three-year, $1.8 million grant to pursue their study of relativistic heavy-ion physics at both Brookhaven National Laboratory and the Large Hadron Collider at the European Council for Nuclear Research (CERN).

Their primary interest is in the products created when heavy ions, for example gold atoms stripped of their electrons, collide at nearly the speed of light to form a quark-gluon plasma, a “perfect liquid” that exists only at a temperature much hotter than the sun’s core and is believed to be the state of matter in the universe moments after the Big Bang.

Geurts leads the team that maintains and operates the STAR time-of-flight detector, one of two experiments attached to Brookhaven’s Relativistic Heavy Ion Collider (RHIC). The detector tracks debris from the collisions with the hope of identifying particles that allows his group to measure the high temperatures and study fundamental symmetries in quantum physics.

Since 2010, the LHC has studied heavy lead ions to create quark-gluon plasmas at higher energies than RHIC.

Geurts’ work at RHIC is increasingly connected to Li’s duties at the LHC, where he uses the highest-energy nuclear collision data provided by the Compact Muon Solenoid (CMS) experiment to study strong interactions in plasmas between quarks, as mediated by gluons. Both are elemental particles that make up protons and neutrons. Rice scientists and engineers design and build many of the electronic components of CMS, an essential part of the Higgs boson discovery in 2012.

“We’re both part of high-energy nuclear physics programs that happen in different energy regimes at different facilities, but we increasingly see overlap in the physics we do,” said Geurts, a professor of physics and astronomy. “We want to integrate our work at the lower and higher energies.”

“We’re grateful for the continued support of the DOE nuclear physics office,” said Li, an associate professor of physics and astronomy. “What’s really special is that there’s a strong connection between the efforts led by the two of us.”

“When Li joined Rice, the heavy-ion effort at CMS kind of took off,” Geurts added. “A heavy-ion group at multiple facilities will clearly benefit the research at both, and help us prepare for the next generation of particle accelerators here in the U.S.”

Geurts noted that Brookhaven is due to shut down RHIC within the next few years to make way for the planned Electron-Ion Collider. “We made a case in our grant that these synergies are going to be essential to prepare our group and, in general, the community for this next generation of experiments.”

This news release can be found online at https://news.rice.edu/news/2022/doe-backs-rice-physicists-collaboration.

Antimatter not so different after all: https://news2.rice.edu/2015/11/04/antimatter-not-so-different-after-all/ 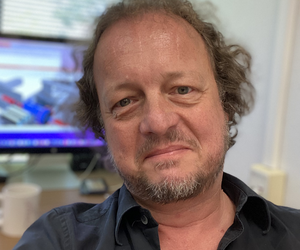