New organomineral fertilizers have been developed in the Ural. They are based on magnesium, sulfur, silicon, calcium and poultry manure. The manure contains organics (carbon), nitrogen, potassium, and phosphorus. These fertilizers are more effective than organic fertilizers and safer than mineral fertilizers. They can be used for growing plants and for soil regeneration. With favorable developments, the production of fertilizers on an industrial scale will begin this year. Now the developer, the company Nika PetroTech, a member of the Ural Interregional Research and Education Center, is in the process of registering a patent, which they expect to receive in the fall.

"Every large city has at least one, or even up to a dozen poultry farms. The average poultry farm produces about 100 tons of manure per day. Something has to be done about it, it have to disposed. Besides, manure is a source of strong unpleasant smell," says Sergey Yakovlev, Head of the Engineering and Technological Department of Nika PetroTech.

Often chicken droppings are used as organic fertilizer by the poultry farms themselves. They grow plants for birds and animals in the fields. However, there are two difficulties.

" Firstly, often manure is put in excessive amounts - 20-30 tons per hectare, which adversely affects the soil and groundwater. Secondly, since manure contains a large amount of pathogenic microflora, it takes up to six months to decompose. In our case, after adding the mineral component, the manure can be used in a day. Moreover, according to preliminary calculations, our fertilizer is not much needed for productive plant growth - no more than one ton per hectare," says Sergey Yakovlev.

The fertilizer is created in the following way: a mineral component based on magnesium sulfate is added to the manure. This dehydrates the organic matter and prevents the reproduction of microorganisms, neutralizing it. At the same time, the water does not go anywhere. It crystallizes and is then released in the fields, for example, during drought.

"When we mix the manure and the mineral component, magnesium sulfate takes up water molecules, which crystallize inside the microorganisms, destroying their shells, heat is released up to 70 degrees. This, in fact, is the pasteurization temperature, which allows to destroy up to 80% of pathogenic microflora. In addition, during the production of organic mineral fertilizer, the acidity (pH) reaches 4. At this acidity, the development of pathogenic microflora is difficult. There are few microorganisms that feel comfortable in such an environment, pathogenic microflora dies, making the fertilizer safe," says Konstantin Lukyashin, Technical Expert at Nika PetroTech.

The first experimental batch has already been released, it is being tested on plants - oats and amaranth. In early June, Ural Federal University biologists planted control samples of plants in the Botanical Garden of the University.

"Our goal is to determine how fertilizers work and what doses and combinations work best for plants. We will see how different combinations of fertilizers affect plant growth and productivity, how soil quality changes, whether there is a change in environmental reaction, whether the soil is enriched with magnesium. During July-August we will conduct an experiment: we will measure, weigh plants. In general, we will assess whether the fertilizer influences the growth and whether the indicators improve," says Tatiana Radchenko, Director of the Department of Earth and Space Sciences at UrFU.

Magnesium is a universal element that forms the basis of chlorophyll and is directly involved in photosynthesis. In addition, magnesium helps increase the efficiency of absorption of other micro- and macroelements. That is, by adding a small amount of magnesium, the yield of crops can be increased by raising the efficiency of other components.

According to the company's representatives, there are already potential customers for the new fertilizers. The company is ready to produce the first industrial batch by the end of the year. All that is needed is investment in equipment (mobile units for poultry farms). 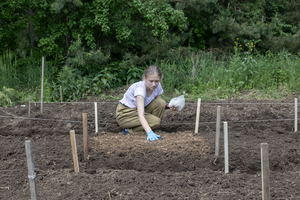 Botanical Garden of the UrFU