In the near future city-dwellers can expect to see a variety of drones in the airspace above where they live, perhaps transporting patients to hospitals, helping tackle fires, or simply delivering parcels. This vision of Urban Air Mobility (UAM), making use of different types of drones, will also help people travel faster and more efficiently through unmanned air taxis – and researchers say it will be in place in a matter of a few years.

A new European project, AMU-LED, is now carrying out co-ordination and substantial testing to manage this airspace traffic and check safety, interoperability and feasibility. The first trial demonstration takes place at Cranfield University, UK, on 30 June, and will be followed by other trial events in the Netherlands and Spain.

One of the key enablers for UAM is U-space, an air traffic management framework to enable the safe and secure integration of drones. U-space is a set of specific services and procedures designed to ensure safe and efficient access to airspace for a large number of drones, based on high levels of digitalization and automation.

Just like the air traffic management system for general aircraft, U-space will ensure that drone operations are carried out safely and efficiently. The system is more automated than current air traffic control, with less human interaction and the capacity to handle more flights simultaneously.

The development of U-space and UAM has been accelerating through research and innovation projects and technological developments.

The AMU-LED project is a Very Large-scale Demonstration (VLD) project funded by the SESAR Joint Undertaking under the European Union’s Horizon 2020 research and innovation programme. AMU-LED will demonstrate the safe integration of manned and unmanned aircraft through U-space, with the ultimate goal of realising increasingly sustainable smart cities. A key step towards this is performing flight demonstrations with various scenarios, situations and use cases in urban environments.

In a series of demos, the project will use large electrical Vertical Take-off and Landing (eVTOL) platforms for passenger and cargo transport, combined with smaller Unmanned Aerial Systems (UAS) performing delivery of goods and medical supplies, surveillance or support for emergency services.

The range of locations allows the project to test a variety of aspects, such as assessing the most efficient way to exchange information between actors (such as the drones, their pilots and the air traffic management system). The project will also test two different concepts for Unmanned Traffic Management architectures.

Demonstrations pave the way for highways in the skies

Gokhan Inalhan, Professor of Autonomous Systems and Artificial Intelligence, is leading Cranfield University’s involvement in the project. He said: “The flight demonstrations will put into practice scenarios, concepts and systems developed throughout the project to test how drones and manned aircraft can operate safely in the same airspace.

“At Cranfield, we will be running virtual flights alongside the drones physically flying at the airport, to test their interactions and air traffic management systems including U-Space. Our results will help inform the later demonstrations and move forward the whole concept of Urban Air Mobility.

“This is a very exciting project and one that will pave the way for highways in the skies, removing traffic and congestion and changing the way we move around.”

Project ready for take-off in series of demonstrations

"After having carried out an impressive amount of work, where our consortium devised and implemented cutting edge concepts of operations for UAM, prepared futuristic yet round-the-corner use cases such as air commute shuttle or last-mile parcel delivery, and integrated innovative unmanned traffic management services, at last we are ready for take-off", clarifies Pablo Menéndez-Ponte Alonso, project leader UTM of NTT DATA Spain that coordinates the European consortium of 17 different enitities that take part in the AMU-LED project. "Cranfield is our first essential demonstration, as it will allow us to understand the readiness of this technology by confronting the actual challenge."

There will be six demonstrations in total, taking place throughout summer of 2022, in Cranfield (UK), Amsterdam (NL), Enschede (NL), Rotterdam (NL), and Santiago de Compostela (SP). Throughout these demonstrations the project team will gather data on the different aspects being tested, which will afterwards be analysed. This will enable the project to draw results for the further development of U-space, providing information on the most efficient way for U-space to enable UAM, providing a safe, impactful and viable solution for smart cities.

As part of the project researchers are also studying the social impact of drones – there is a public survey which people are encouraged to complete: https://forms.gle/2FtREVYDowTscoPg9 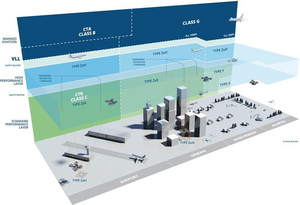