Coral is a complicated holobiont, harboring an array of life forms at different scales, including coral cells, zooxanthellae, and associated bacteria, archaea, and viruses.

A research group led by Prof. WANG Xiaoxue from the South China Sea Institute of Oceanology (SCSIO) of the Chinese Academy of Sciences has uncovered a novel interplay between a coral pathogen and other coral commensal bacteria, which directly determines the health of stony coral.

The work was published in Nature Ecology & Evolution on June 30.

The tropical ocean environment is changing at an unprecedented rate. Ocean warming is threatening the health of coral reefs. Besides coral bleaching, stony coral tissue loss disease (SCTLD), a disease caused by a coral pathogen, is rampaging in several tropical oceans.

Galaxea fascicularis (also known as galaxy coral) is a massive reef-building coral and is common near Hainan Island and the Xi Sha Islands of the South China Sea. The large polyps of galaxy coral resemble a starburst and are tipped in white, giving it a sparkling, crystal-like appearance.

During their survey, the researchers found that galaxy coral suffers from SCTLD in some regions. They sampled gastric fluids from healthy and unhealthy corals from the South China Sea. Among the fluids, researchers identified the temperature-dependent pathogen Vibrio coralliilyticus. When infected with this pathogen, galaxy colonies showed serious tissue loss under acute heat stress, confirming that Vibrio coralliilyticus is a causative agent of SCTLD in galaxy coral.

Researchers identified a key enzyme, LodA (L-lysine-epsilon-oxidase), in this coral pathogen. LodA oxidizes L-lysine and generates hydrogen peroxide, which helps to eliminate a nonpathogenic Vibrio species that cohabits in the coral by inducing a prophage hidden in its genome.

Additionally, this coral pathogen also uses LodA to outcompete other bacteria that is symbiotic or associated with coral, e.g., Endozoicomonas spp., through LodA-dependent prophage induction in wild coral. Thus, the researchers demonstrated that the ecological relevance of LodA, which was previously associated with antimicrobial activities, is triggering prophage induction.

Bacterial hosts, e.g., native bacteria in coral, can increase their fitness through the acquisition of prophages when nutrients are scarce; however, "the risk is that this hidden prophage can be manipulated by competitors and can be converted into a bomb which kills the host bacterial cells," said WANG Xiaoxue, the study's lead researcher.

The coral pathogen, as an invader, activates this hidden bomb in the native microbiota and eliminates competitors, thus colonizing corals and eventually killing the galaxy corals.

This study demonstrates that the coral pathogen V. coralliilyticus invades the coral G. fascicularis by competitively killing resident strains via the generation of hydrogen peroxide to cause SCTLD.

"Clearly, pathogens have evolved many strategies to evade host defenses to colonize the gastric cavity of wild corals, and the results can now be taken into account for coral reef conservation," said WANG. 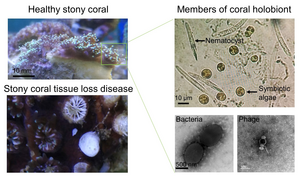 Healthy and unhealthy galaxy coral and members of the coral holobiont