LA JOLLA—(July 6, 2022) Understanding how HIV replicates within cells is key for developing new therapies that could help nearly 40 million people living with HIV globally. Now, a team of scientists from the Salk Institute and Rutgers University have for the first time determined the molecular structure of HIV Pol, a protein that plays a key role in the late stages of HIV replication, or the process through which the virus propagates itself and spreads through the body. Importantly, determining the molecule's structure helps answer longstanding questions about how the protein breaks itself apart to advance the replication process. The discovery, published in Science Advances on July 6, 2022, reveals a new vulnerability in the virus that could be targeted with drugs.

“Structure informs function, and the insights we gained from visualizing the molecular architecture of Pol give us a new understanding of the mechanism by which HIV replicates,” says co-senior author Dmitry Lyumkis, assistant professor in the Laboratory of Genetics and Hearst Foundation Developmental Chair at Salk.

Scientists previously knew that HIV Pol, a polyprotein, breaks into three enzymes—a protease, reverse transcriptase and integrase—that work together to assemble the mature form of the virus. The protease plays a critical role in initiating this process by chopping up the molecule to separate the other components. However, it was previously unknown how the protease itself breaks free, first from the larger polyprotein HIV Gag-Pol and then from HIV Pol, to accomplish this task. The new paper suggests that the protease initiates the process by self-cleaving or cutting itself free from the rest of the molecule, aided by reverse transcriptase and, possibly, integrase.

“It was known (but not understood) that there is a coupling between these enzymes before HIV Pol breaks apart. Visualizing the HIV Pol structure explains the basis for this complex mechanism,” says co-senior author Eddy Arnold, board of governors professor and distinguished professor in the Center for Advanced Biotechnology and Medicine at Rutgers University.

“The first challenge was producing a stable version of HIV Pol so the structure could be analyzed, which had never previously been reported,” says co-first author Jerry Joe Harrison, senior lecturer at the University of Ghana.

“This was a key missing piece of the HIV structural puzzle,” adds Arnold.

The team used cryogenic electron microscopy, an imaging technique to which Lyumkis has made important contributions, to reveal the three-dimensional structure of the HIV pol protein molecule. This led to the discovery that Pol is a dimer, meaning it’s formed by two proteins bound together. The finding was a surprise because other similar viral proteins are single-protein assemblies.

The group showed that in this two-sided structure, the protease component of Pol is “loosely tethered” to the reverse transcriptase component in a binding configuration that keeps the protease slightly flexible.

“It’s holding the protease at arm’s length, loosely, and we believe that gives the protease a little bit of movement, which in turn allows it to initiate the cutting of polyproteins that is a prerequisite for viral maturation,” says co-first author Dario Passos, a former researcher in Lyumkis’ lab at Salk. “Current HIV treatments include multiple classes of inhibitors for all three enzymes, and the discovery also reveals a new vulnerability that could be targeted with drugs.”

The authors say the discovery opens the door for important follow-up research, including studies of the structure of the larger and more complex polyprotein Gag-Pol, also involved in viral assembly, as well as taking a closer look at the role of integrase in assembling the mature form of the HIV virus during replication.

Other authors included Jessica F. Bruhn of Salk; Joseph Bauman, Lynda Tuberty and Francesc Xavier Ruiz of Rutgers; and Jeffrey DeStefano of the University of Maryland. 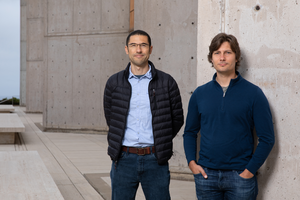