The related results were published in Spectrochimica Acta Part A: Molecular and Biomolecular Spectroscopy.

Acetylation is a common and extremely important protein modification in biology and plays a key regulatory role in cellular metabolism. There are two ways of protein acetylation, one is Nε-acetylation specific to lysine residues, and the other is N-terminal acetylation that can occur on various amino acid residues. At present, N-terminal acetyltransferase is generally used to label to determine whether lysine residues are acetylated, but the accuracy of this method is still controversial. Identifying protein acetylation at the molecular level is one of the current research challenges, and the key is to accurately localize and characterize the acetylation of lysine to gain a clear and systematic understanding.

To solve this problem, the research team systematically studied the structural changes and corresponding vibrational spectral characteristics of the three acetylation types (Nε-Ace-Lys, Nα-Ace-Lys and NαNε- Ace-Lys) of L-lysine through infrared and Raman spectroscopy experiments and density function theory (DFT) calculations. They found that the infrared and Raman characteristic bands of amide group, carboxyl group and other groups can be used to effectively identify different acetylation types.

In other words, whether lysine was acetylated could be told from the characteristics of infrared and Raman spectra, and the type of lysine could also be judged.

At the same time, the research team's vibrational spectroscopy identification strategy for acetylation was also verified in the peptide model.

This research provided the vibrational mode analysis of acetylated lysine, and proposed a spectral identification and a new characterization method for lysine acetylation, which offered a theoretical and experimental basis for the structural analysis of protein acetylation in biological systems. 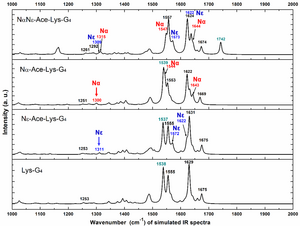