Thiols typically form self-assembled monolayers (SAMs) on gold. Now, Japanese researchers from Kumamoto University have found a way to adsorb thiol at a particular site on the gold surface. By controlling a special two-dimensional, low symmetry nanographene structure (ovalene), it is possible to create a site where a single thiol molecule can be adsorbed. The researchers believe they are the first in the world to succeed in controlling the isolated adsorption of a thiol molecule in a nanoscale cavity composed of the ovalene molecular adlayer on the surface of a gold electrode. This ability for precise molecular design by "planting a molecule" is expected to be applied to molecular level patterning, elucidation of isolated molecular properties, and the foundation for the development of three-dimensional nanostructures for use in next-generation electronic devices.

Graphene, the well-known two-dimensional nanosheet of carbon, has several uses in electronics, fuel cells (as a separation membrane), and sensor research. It is expected that more advanced processing will bring about new functionality, but one stumbling block has been the technical difficulty of making regularly spaced, uniformly sized holes in the material. However, the shape and size of the well-defined structure in nanographene can be controlled though organic synthesis. Therefore, in this research, Kumamoto University researchers focused on the nanographene ovalene, which has a low molecular weight and a low chemical structure symmetry compared to other nanographenes, and studied its chemisorption of thiol molecules to better understand the ovalene molecular adlayer structure.

The ovalene adlayer was prepared by immersing a gold single crystal substrate (Au(111)) in an ovalene solution dissolved in an organic solvent for a predetermined time. Then, using an Electrochemical Scanning Tunneling Microscope (EC-STM), which resolves material surfaces at the atomic level, the researchers successfully observed the molecular arrangement of the ovalene adlayer on the gold surface.

Next, the researchers watched as a solution of thiol molecules was added into the EC-STM sample stage at a predetermined electrochemical potential. They found that the ovalene adlayer structurally changes depending on the potential of the electrodes in the acidic solution. Each ovalene molecule can be clearly resolved and, with careful observation, the adjacent ovalene molecules can be seen to rotate by 60°. This regular rotation creates nanoscale cavities (approximately 0.3 nm) of triangle-shaped formations consisting of three ovalene molecules in an arrangement similar in shape to the triangular “onigiri” found in Japanese lunchboxes. The cavities are a suitable site for the adsorption of a sulfur atom in a thiol molecule, and only a single thiol molecule can be accepted into a single cavity. Other molecular groups having functional sites at the end of the thiol molecule, such as carboxylic acid, pyridine, and pyrazine, were found to be similarly absorbed at equal intervals. The researchers believe that such a co-adsorption structure is obtained by balancing the chemical bond formation between gold and sulfur with the physical adsorption of the ovalene monolayer.

“These results were based on the “bottom-up” concept, meaning that precise structural control is obtained by creating material structures from atoms and molecules,” says lead researcher Professor Soichiro Yoshimoto. “And while this research has only found one fundamental physical characteristic, we believe that it can be considered an ultimate sensor since it captures a single molecule at a time.”

In the future, the researchers expect that precise molecular design will be used to elucidate isolated molecular physical properties, as the base structures in the development of next-generation electronic devices, and in the formation of three-dimensional nanostructures.

There are no conflicts to declare. 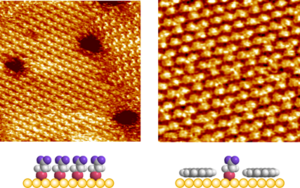 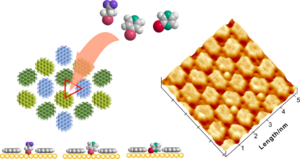