The finding is quite a sensation, as the objects are simple pieces of bone with one or several grooves cut into them. In a previous study, the bones were classified as animal bones.

The pendants made of human bone raise many questions: Whose bones were they made of and how were the bones acquired? Did the people wearing the pendants know whose bones they were made of? Did the origin of the bones make a difference?

In archaeological excavations carried out in the 1930s on the island of Yuzhniy Oleniy Ostrov on Lake Onega, the remains of deceased individuals and various objects from 177 graves were exhumed.

Humans as the raw material for every third pendant

Based on animal tooth pendants and miniature sculptures, the Eurasian elk, the beaver and the brown bear were important animals for these people. Among the tooth pendants were pendants made of bone whose shapes did not make it possible to identify the species. The Animals Make Identities research project at the University of Helsinki investigates the meanings of animals in Stone Age cultures on the basis of burial finds. Associate Professor Kristiina Mannermaa, the project lead, and her colleagues sent bone pendants found in the graves to the BioArCh research facility at the University of York to be analysed using the zooarchaeology by mass spectrometry (ZooMS) technique. With the help of mass spectrometry, the technique identifies species from peptides, or amino acids, extracted from proteins contained in extremely small samples of bone.

The results came as a surprise: 12 out of 37 samples were found to be human. Based on the study, the rest of the pendants were made primarily from the bones of elks and a bovine animal. The human bone pendants are flakes of broken long bones of varying sizes, with one or two grooves cut into them. They come from three graves, one of which contained two deceased individuals. The pendants were found mainly in the same context with tooth pendants and animal bone pendants.

From ethnographic connections, the use of human bones as a raw material for objects is known in, for example, Asia and South America, but prehistorical data is thin on the ground. At times, attempts were made to debase body parts of enemies by working them and keeping them on display. At the same time, the body parts of family members were worn out of respect or attachment, for example, after processing them into pendants.

Usually, the use of human bone as a raw material is associated with cannibalism, as there are often traces of meat removal on the bones. However, the scarcity of incontrovertible evidence makes it difficult to verify cannibalism on the basis of archaeological finds. According to Mannermaa, cannibalism for ritual purposes may have been more common in the Stone Age than thought, but we do not know the underlying causes.

“The surface of the bone pendants we investigated is so worn out that you cannot make out any potential cut marks, which means we have no reason to suspect cannibalism on the basis of the discoveries in Yuzhniy Oleniy Ostrov,” Mannermaa notes.

On the basis of a uniform general look, the bone pendants may have been substitutes for lost tooth pendants in ornaments and rattles. The researchers consider it particularly interesting that the same type of bone pendants were made of both animal and human bones, and that they were found in the same contexts as the tooth pendants.

“The fact that the use of human bones was not emphasised in any way and that the objects are indistinguishable and similar to objects made of animal bones may indicate the intertwining of animals and humans in the Stone Age worldview,” Mannermaa says. “Using animal and human bones together in the same ornament or clothing may have symbolised the ability of humans to transform into animals in their minds, in addition to which they believed that animals were capable of taking human form. We know that such blurring of forms and boundaries has been and still is part of the worldview of indigenous peoples.”

In addition to Kristiina Mannermaa, the study, which received funding from the European Union, was carried out by Anna Malyutina, Alisa Zubova and Dmitriy Gerasimov from the Russian Academy of Sciences.

Human bones used for making pendants in the Stone Age 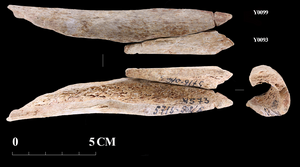 Two pendants made of the same human femur.