Impaired hearing affects over 1.2 billion people worldwide. But crocodiles, who live almost as long as humans and can surpass 70 years of age, have good hearing throughout their lives. One reason is because crocodiles can create new hair cells, and a research group from Uppsala University is now on the path to finding out why. Hopefully, knowledge from the world of crocodiles will be able to help people with impaired hearing.

“We can see that new hair cells seem to be formed from the activation of so-called support cells, which is connected to crocodiles having certain cell structures that humans appear to lack. Our hypothesis is that nerves that carry impulses from the brain, so-called efferent nerves, trigger that regrowth,” says Helge Rask-Andersen, professor of experimental otology at Uppsala University and one of the researchers behind the study, which is now being published in Frontiers in Cell and Developmental Biology.

Over a billion people experience impaired hearing and this creates significant problems for individuals and often reduces perceived quality of life. The most common cause of hearing impairment is receptors in the ears that have stopped working, and these receptors cannot be regenerated in humans. But they can in animals that are not mammals, such as crocodiles, which despite living upwards of 70 years, have good hearing throughout their lives.

It is known that animals can quickly regenerate the hair cells in their ears if they are damaged. But it is not really known how. Crocodiles have excellent hearing that is adapted for being on land and underwater. One distinctive characteristic is that the receptors’ sensitivity to different pitches is affected by external temperature, making it perfect for different kinds of dangers in different environments during evolution.

One interesting discovery was that small cell particles are secreted in the crocodile’s ear. The particles resemble exosomes and can secrete enzymes that break down or form the membrane against which the cilia in the ear rub as sound comes in.  The exosomes form small alveoli, cavities, that make it easier for the cilia to bend when sound vibrations reach the ear.

“One hypothesis is that this increases sensitivity to sound and hearing improves. Our hope is to learn how crocodiles regenerate their hair cells and to eventually be able to use that on people in the future,” says Helge Rask-Andersen.

Frontiers in Cell and Developmental Biology

Regeneration in the Auditory Organ in Cuban and African Dwarf Crocodiles (Crocodylus rhombifer and Osteolaemus tetraspis) Can We Learn From the Crocodile How to Restore Our Hearing? 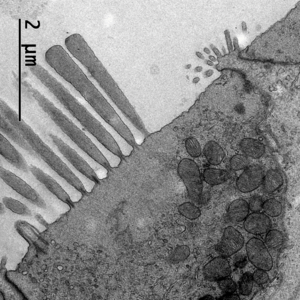 Hair cell of a crocodile magnified around 5000 times 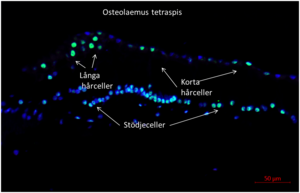 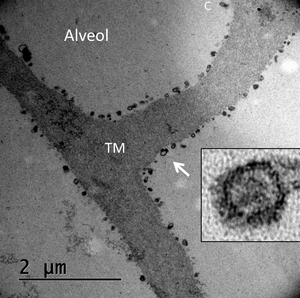 Alveoli in the porous membrane