Scientists at Estonian University of Life Sciences (EMÜ), Swedish University of Agricultural Sciences (SLU) in collaboration with researchers from Estonian Marine Institute of the University of Tartu, for the first time characterized the genetic structure and diversity of Northern pike in the eastern coast of the Baltic Sea. Anti Vasemägi, Professor at SLU, explained that freshwater spawning grounds are of utmost importance for pike stocks in Estonian coastal areas, as majority of offspring originate from freshwater spawning grounds. "However, we did not know, if geographically close spawning areas support genetically distinct pike populations," said Vasemägi. "To our surprise, it turned out that pike from different parts of Island of Saaremaa are genetically very different from each other and can be easily separated even with relatively small number of molecular markers."

Alfonso Diaz Suarez, the first author and a PhD student in the Chair of Aquaculture at EMÜ, explained that using short repetitive DNA motifs, commonly known as microsatellites, almost 500 pike specimens collected from seven spawning areas were analysed over two years. “We found that the pike in Estonian coastal sea are divided into several genetically highly divergent populations,” Suarez said. "Thus, it s very likely that pike spawners remember their birthplace and come back to the same spawning area to reproduce," he continued. Homing behaviour, in turn, suggests the existing spawning grounds need protection in order for fishermen to have something to catch. The temporal stability of the observed fine scale structure also hints that pike populations likely have adapted to local environmental conditions and therefore relocations from one location to another should be avoided because introgression of foreign genes may be harmful to the local population.
How can genetic research benefit fishermen? Professor Riho Gross, co-author of the study, responds: "Mixed stock analysis and assignment tests enable to assess the contribution of separate populations to fisheries catches and thus help to better understand the exploitation and dynamics of pike stocks." He added: "The genetic databases and DNA fingerprinting methodologies also make it possible to resolve possible disputes related to illegal fishing."

The full text of the study is available on the Fisheries Research website (https://www.sciencedirect.com/science/article/pii/S0165783622001795?dgcid=coauthor). The study was conducted within the framework of the grant PRG852 funded by the R&D project L190003VLVI (RITA1 / 02-60-05) "Innovative approaches to monitoring and assessing marine environment and nature values ​​in the Estonian sea area" and Estonian Research Council. 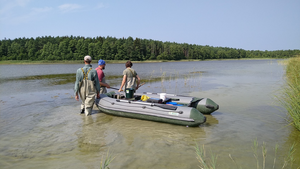 Fish scientist on fieldwork in Saaremaa.