This revolutionary membrane technology can be applied to water purification, and thus has the potential to contribute towards tackling both global environmental and energy issues by helping to ensure safe drinking water supplies and clean energy. It is hoped that this will accelerate the move towards carbon neutral, sustainable societies.

The results were first published in the ‘Chemical Engineering Journal’ on April 7, 2022.

Research Background
Adequate access to water in many regions of the world is becoming an increasing problem in the face of global climate change, and developing countries’ sharp population increases and economic growth. It has been reported that two thirds of the world’s population will suffer water shortages by 2025. To prevent these severe water shortages, the widespread adoption of water recycling and purification technologies, as well as efficient usage of water production technologies (e.g. seawater desalination), are crucial.

The membrane filtration method is currently used in 900 water purification plants because it continuously and stably provides good quality water. However, there is the problem of membrane fouling where the membrane, which separates and removes contaminants from the water, becomes clogged. When membrane fouling occurs, it is no longer possible to obtain the required amount of treated water. Therefore, it is necessary to either wash or replace the membrane. To tackle this issue, much research has been conducted into various methods of fouling prevention however a sufficient solution has yet to be found.

One method has been proposed that requires less energy and has a low environmental impact. This involves introducing a photocatalytic material (such as titania) into the membrane and removing pollutants via photocatalysis. However, in addition to being able to treat water, such a membrane must also demonstrate visible light responsiveness and high photocatalytic activity. This requires the designer to consider the membrane’s design from multiple perspectives including the membrane material and structure.

In terms of membrane functionality, the laminated nanofiltration membrane with a 74:25 ratio of niobate (HNB3O8) nanosheet to carbon nitride (g-C3N4) nanosheet maintained its separation performance while demonstrating an 8-fold increase in water permeance (Figure 1b). In terms of photocatalytic performance, the integration of carbon nitride nanosheets enabled visible light to be absorbed. In addition, this combination of nanosheets greatly improved the membrane’s ability to photodegrade cationic dyes (rhodamine B) (Figure 1c).

When the developed composite membrane is used as a separation membrane, the niobate nanosheets give the laminated membrane its structure, while the carbon nitride is introduced between these layers and acts as a spacer. Consequently, the channels in the laminated membrane expand, greatly increasing the rate of water permeation (Left side of Figure 2a). Controlling the channel structure in this way enables 90% of a dye (with molecular weight of approximately 1000) to be separated from the water. The photocatalytic functionality of the membrane is as follows: the carbon nitride nanosheets function as photocatalysts that absorb visible light and the niobate nanosheets act as catalytic promoters. Furthermore, the research group revealed that appropriately controlling the band structure enabled the electrons to move efficiently, resulting in a dramatic increase in photocatalytic activity (Right side of Figure 2a). Using these results as a basis, the researchers applied the membrane to water purification and conducted a membrane fouling experiment using Bovine Serum Albumin (BSA) as the foulant. BSA fouling reduced the water permeation speed of the membrane to 1/5 of its normal performance. However, the researchers succeeded in completely restoring its permeance by irradiating the composite nanosheet membrane (Figure 2b).

Further Research
By interweaving different types of nanosheets to form 2D nanochannels, the researchers successfully developed a membrane that demonstrates both excellent water permeance and photocatalytic activity. It is expected that further improvements can be made to membrane functionality and photocatalytic action by changing the type of nanosheet to more precisely control the formation of 2D nanochannels and the band structure. Next the researchers hope to increase the membrane area and develop the photocatalytic process, aiming for industrial and practical application.

Glossary
1. Photocatalyst: A material that demonstrates catalysis (speeds up a reaction) when illuminated by light. Excited electrons and holes generated inside the photocatalyst when it absorbs light result in reduction and oxidation, respectively. This study utilizes a photocatalyst for the oxidative degradation of an organic compound.
2. Fouling: The phenomenon whereby the substances to be separated (foulants) from the water adhere to and accumulate on the membrane’s surface and pores.
3. Nanosheet: A colloidal material with a molecular thickness and a planar size of several hundred nanometers to micron order. In other words, an extremely thin 2D structure that is invisible to the naked eye. Studies have reported on various types of nanosheets such as metallic oxide nanosheets (e.g. graphene oxide).
4. Niobate nanosheet: A type of metallic oxide nanosheet. Nanosheet crystals are formed by horizontally connecting the octahedral structure of NbO6-. It is used as a photocatalyst and as a solid acid catalyst.
5. Carbon Nitride: A family of materials. In this study, a planar structure consisting of hydrogen, carbon and nitrogen atoms (graphitic carbon nitride, g-C3N4). It is a semiconductor with a small bandgap, and is a visible light-responsive photocatalyst.

Acknowledgements
This study was supported by a JSPS KAKENHI Grant-in-Aid for Scientific Research (c) (Grant Number: JP19K05121) and the Ministry of Science and Technology, Taiwan (Grant Number: 110-2221-E-011-012-MY3).

New photocatalytic membrane that can be cleaned using light energy 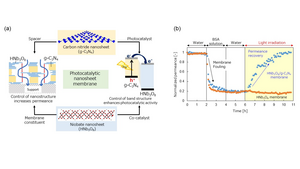