Rice has a long history as a staple food in Japan and other parts of Asia. The results of a new study by an international research collaboration suggest that the emergence of cultivated rice from wild rice plants is the result of three gene mutations that make the seeds (i.e. the grains of rice) fall from the plant less easily.

In their investigations, the researchers discovered that each of the three mutations individually have little effect but when all three mutations are present the panicles of the rice plant retain more of their seeds- resulting in a greater crop yield.

It is believed that the domestication of wild rice began when our ancestors discovered and started to cultivate rice plants that do not drop their seeds easily, paving the way for stable rice production. It is hoped that these research results can contribute towards future improvements to the ease in which rice seeds fall (i.e. making the crop easier to thresh) and the development of high-yield rice cultivars where every grain can be harvested, reducing waste.

This discovery was made by an international collaboration which included researchers from Kobe University’s Graduate School of Agriculture (Japan), the National Institute of Genetics (Japan), University College London (UK), the University of Warwick (UK), Yezin Agricultural University (Myanmar) and the Cambodian Agricultural Research and Development Institute.

These research findings were published online in the Proceedings of the National Academy of Sciences of the United States of America (PNAS) on June 23 (JST).

Research Background
Oryza sativa (often referred to as Asian rice in English) is widely grown and consumed worldwide.It is known to have originated from the wild rice weed Oryza rufipogon (Figure 1). It is believed that rice began to be cultivated when hunter gatherers in ancient times chose individual wild rice plants that had suitable characteristics for this purpose. Wild rice plants perform a seed shattering process which scatters their seeds, enabling them to propagate efficiently. However, when cultivating rice, this seed shattering must be suppressed in order to obtain a stable crop (Figure 2A). In 2006, the sh4 gene was discovered: this gene is necessary for the commencement of seed shattering in plants including rice, and it was proposed that a mutation in this gene enabled the cultivation of rice. However the current research team showed that this sh4 mutation alone is insufficient to prevent seed shattering loss, suggesting that other gene mutations are also involved. With a focus on the early history of rice cultivation, this study brought together specialists in plant genetics, archaeobotany and structural mechanics to elucidate how increasing yields of rice came to be cultivated.

Research Methodology
Seed shattering is caused by a structure called the abscission layer that is formed at the base of each rice seed (Figure 2 B and C). The researchers found that a single nucleotide substitution (from cytosine to thymine) in the DNA of the qSH3 gene is required to inhibit the abscission layer (Figure 3), in addition to the aforementioned sh4 gene mutation. This qSH3 gene mutation is found in the main types of rice that is cultivated worldwide (indica and japonica). Individual mutations related to seed shattering, for example in genes sh4 and qSH3, cannot prevent shattering in wild rice plants on their own. However, the researchers discovered that when sh4 and qSH3 mutations were combined, this partially inhibited the formation of the abscission layer, which is required for seed shattering (Figure 4). Despite this, they concluded that such a small inhibition would not be enough to produce a stable crop yield, as seeds drop easily in a natural environment. Thus, they decided to focus on panicle shape next. Panicle refers to the clusters of thin branches at the top of the rice plant that carry the seeds.

Wild rice has an open panicle structure which enables the seeds to fall easily (Figure 5). Through hybridization, the researchers produced 8 wild rice plants, each with a different combination of three gene mutations: a mutation at the SPR3 that causes the panicles to close, and the aforementioned sh4 and qSH3 mutations. They then investigated the yield of each plant. They found that individual mutations had little effect and that even combining two mutations did not result in a large yield increase. However, when all three gene mutations were present, the yield increased exponentially (Figure 6).

An analysis of the structural mechanics of the closed panicle alteration and the abscission layer inhibition revealed a complementary relationship between the two. The burden of gravity on the seed base’s abscission layer is lower in closed panicle plants than in open panicle plants, which potentially brings about an even greater crop yield by further reducing seed shattering. ‘Non-seed-shattering behavior’ caused by sh4 and qSH3 mutations and ‘closed panicles’ caused by the SPR3 mutation are completely unrelated characteristics, however the incidental collaboration between these characteristics is considered to be what enabled rice to become a crop.

In the three arrows parable, 16th century Japanese warlord MORI Motonari gave each of his three sons an arrow and they were able to break the individual arrows easily. However, a bundle of three arrows is stronger and by showing his sons that three arrows together could not be broken, he explained that the three of them should work together govern the land. In rice cultivars, three mutations that have little effect on their own incidentally work together - an important stepping stone towards the success of rice as a crop.

Rice has been a source of daily energy for people for thousands of years and some Japanese rice cultivars are considered cultural works of art. These research results not only reveal the seed shattering mechanism, they also give us insight into the long history behind the improvement of rice growing.

Further Developments
Even though rice is an essential crop worldwide, it is still not fully understood how it was domesticated. Advances in agricultural techniques were accompanied by the development of rice cultivars that dropped their seeds less and less easily, suggesting that the acquirement of non-seed shattering behavior is the result of multiple gene mutations. It is hoped that by further investigating these mutations, the cultivation process for rice can be elucidated. In addition the amount of seed shattering could be controlled utilizing genes with many of these mutations, leading to the development of new rice cultivars where all the seeds produced by the plant can be harvested.

Acknowledgements
This research was funded by the following:

In addition, the wild rice accessions used in this study were provided by the National Institute of Genetics (Japan) and the National Bioresource Project (NBRP) of the Ministry of Education, Culture Sports, Science and Technology, Japan.

Journal:
Proceedings of the National Academy of Sciences of the United States of America (PNAS)

It takes three: The genetic mutations that made rice cultivation possible 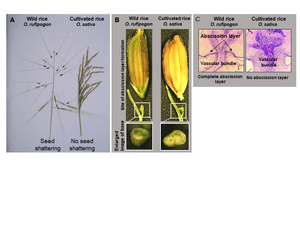 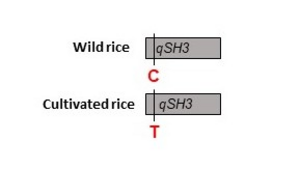 Figure 3: Discovery of the qSH3 gene related to seed-shattering loss in wild rice 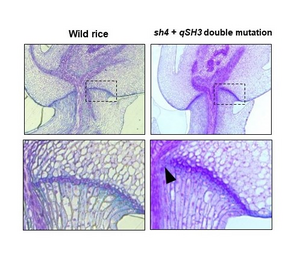 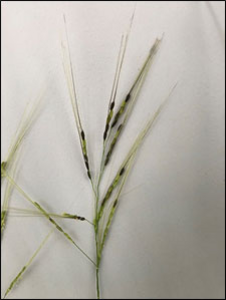 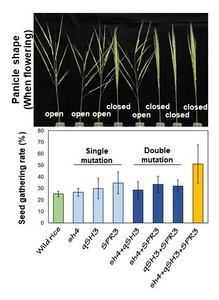 Figure 6: Seed gathering rate results for rice plants with a combination of three genetic mutations (in sh4, qSH3 and SPR3)