Researchers at the Department of Energy’s Oak Ridge National Laboratory have definitively linked the function of a specific domain of proteins important in plant-microbe biology to a cancer trigger in humans, knowledge that had eluded scientists for decades.

The team’s findings, published in Nature Communications Biology, open up a new avenue for the development of selective drug therapies to fight a variety of cancers such as those that begin in the breast and stomach.

ORNL scientists set out to prove experimentally what they first deduced with computational studies: that the plasminogen-apple-nematode, or PAN, domain is linked to the cell proliferation that drives tumor growth in humans and defense signaling during plant-microbe interactions in bioenergy crops. The association was first made as researchers explored the genomes of crops like poplar and willow.

In the latest study, the ORNL team pinpointed four core amino acids called cysteine residues in the HGF protein critical to the PAN domain’s function and studied their behavior in human cancer cell lines. They found that mutating any one of those amino acids turned off the signaling pathway known as HGF-c-MET that is abnormally heightened in cancer cells, causing them to rapidly multiply and spread.

Since cysteine residues are known to have many functions, the scientists also randomly tested other cysteines throughout the protein and found that none of them had the same impact on shutting down HGF-c-MET signaling. Mutating the four key cysteines had no effect on the overall structure of the protein, and merely inhibited the cancer signaling pathway, the team noted in the study.

Disrupting the right signal is one of the biggest challenges in developing new cancer therapies, said ORNL geneticist Wellington Muchero.

“It’s very difficult to engineer molecules to interfere with an entire protein,” he said. “Knowing the specific amino acids to target within that protein is a big advancement. You don’t have to search the entire protein; just look for these four specific residues.”

The identification of those core residues is a testament to the predictive power the team has built at ORNL, leveraging the lab’s expertise in plant biology and biochemistry, genetics, and computational biology, as well as its supercomputing resources and the CRISPR/CAS-9 gene editing tool.

The discovery could lead to treatments for other diseases, including disrupting the infection pathway in mosquitos to make them less able to carry the malaria parasite, and fighting the HLB virus killing citrus trees in Florida and California by targeting the Asian citrus psyllid insect that spreads it.

In plants, ORNL scientists are using their knowledge of the PAN domain to improve resistance to pathogens and pests in biomass crops, such as poplar and willow, that can be broken down and converted to sustainable jet fuel. They are exploring the genetic processes that encourage beneficial interactions between plants and microbes to build hardiness in those crops.

The research demonstrates the close similarities in the DNA structure of plants, humans and other organisms, which make plants an important discovery platform, Muchero said. “We can do things with plants that you cannot do with humans or animals in the research process,” he added.

“I can work with equal efficiency in plant and human cancers. The expertise is the same,” said Debjani Pal, an ORNL postdoctoral researcher with a background in biochemistry and human cancer research. “We’ve established a globalized experimental platform here at ORNL that shows no matter what system you’re using, plant or animal, if your hypothesis is correct then the science is repeatable in all of them, no matter what cell line you’re using.”

“At the bottom of it all, we have the same biological underpinnings,” Muchero said.

UT-Battelle manages Oak Ridge National Laboratory for DOE’s Office of Science, the single largest supporter of basic research in the physical sciences in the United States. DOE’s Office of Science is working to address some of the most pressing challenges of our time. For more information, visit energy.gov/science. 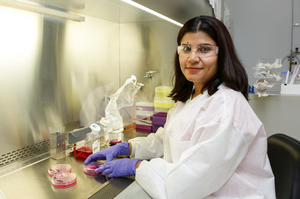 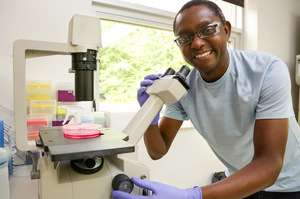 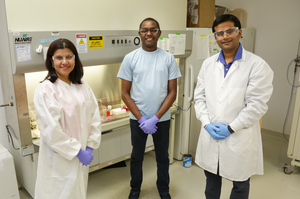