Households across the United Kingdom are urged to be on the lookout for hundreds of precious artworks created by Australian First Nations children who were forcibly taken from their families in the 1940s.

A selection of the treasured collection created by Aboriginal children interned at the remote Western Australian settlement of Carrolup in the 1940s will be showcased at The Portico Library in Manchester until September 26 and the University of Glasgow Memorial Chapel from October 5 to November 11.

It is the first time this selection of artworks has returned to the UK in 70 years – after London Soroptimist Club Founding President Mrs Florence Rutter first met the artists and arranged exhibitions across London, Manchester, Birmingham, Liverpool, Edinburgh and Glasgow during the 1950s. Proceeds from the sale of the artworks were used to purchase more drawing materials for the children at Carrolup.

Mrs Rutter recognised the significance of the works after visiting Carrolup in 1949, where teachers Noel and Lily White had found a way into the hearts of the children through art. Many Carrolup artists became prolific artists, surprising the world with their ability to reveal their deep understanding of Country - Nyungar Boodja.

The children’s drawings set off on what turned out to be an incredible 65-year journey circumnavigating the world, including a 40-year hiatus in the US, where the works lay undiscovered in storage at Colgate University in New York.

John Curtin Gallery Director Mr Chris Malcolm is calling on the broader UK community to help find any other missing works created by the children of Carrolup in the 1940s so they may be documented as part of the healing journey of the descendants of the artists.

“We are encouraging people across the UK to help our global search for these culturally significant drawings by checking their attics, cupboards and households for any similar artworks,” Mr Malcolm said.

“The key clues that people need to be looking out for include the use of chalk on paper and many depict the Australian landscape and wildlife, including kangaroos. We would urge everyone to see for themselves at the new two exhibitions in Manchester and Glasgow which tell this incredible story.

“A critical part of the reconciliation process for addressing the wrongs of the past include uncovering these priceless artworks as they could be the only physical connection a family has with their ancestors. The artworks form a basis from which we can deepen our knowledge and understanding of our past, and help us walk together towards a better future.”

Since 2013, John Curtin Gallery at Australia’s Curtin University – in partnership with Indigenous Elders – has been the custodian of The Herbert Mayer Collection of Carrolup Children’s Art, which provide an insight into the lives and experiences of the children who are now known as Australia’s Stolen Generations.

The process of reconnecting Carrolup artworks with families is at the heart of Curtin University’s Carrolup Centre for Truth-telling, an ambitious project to create a permanent home for the collection in Australia and provide an opportunity for others to learn about this tragic period in Australian history.

Anyone across the UK who thinks they may have found one of the Carrolup children’s artworks can contact us via our website.

Presented by the John Curtin Gallery as part of the UK/Australia Season 2021-22 and supported by the Department of Local Government, Sport and Cultural Industries and BHP with guidance from Goreng Elder of the Nyungar Nation Mr Ezzard Flowers, ‘Tracing the art of a Stolen Generation: the child artists of Carrolup’ is curated by Australian First Nations Art Curator Michelle Broun and Adjunct Curator Dr Helen Idle.

Following the exhibition at The Portico Library in Manchester, which runs from July 7 to September 26, it will travel to the University of Glasgow Memorial Chapel and be on display from October 5 to November 11, 2022.

For more information about the children’s artworks and the Carrolup Centre for Truth-telling, visit here.

Tracing the art of a Stolen Generation: the child artists of Carrolup:

The John Curtin Gallery seeks to inspire audiences to create a more just and equitable world. Its mission is to interrogate contemporary issues through the visual arts, presenting the highest quality dynamic exhibitions from local, national and international artists, and collecting works representative of the complex and rich cross-cultural and multicultural practice in Australia and the region. Located on Whadjuk Nyungar Boodja country, John Curtin Gallery is one of Western Australia’s major public art galleries and one of the largest and best-equipped university galleries in the country. Its significant reputation attracts exhibitions by local, national and international artists, presenting works across a wide range of mediums. The Gallery capitalises on its location within a research-rich environment to curate exhibitions that bridge art, science and academia in engaging and innovative ways. Its custodianship of the Herbert Meyer Collection of Carrolup Children’s Art is guided by protocols established by the Carrolup Elders Reference Group. For more information about the Gallery, visit here.

The UK/Australia Season 2021-22 is a joint initiative by the British Council and the Australian Government’s Department of Foreign Affairs and Trade. The Season highlights the breadth of partnership between Australia and the UK and aims to deepen and extend cultural connections. The Season started in September 2021 and concluded in March 2022 in Australia and will conclude in December 2022 in the UK. The theme ‘Who Are We Now?’ reflects on our history, explores our current relationship, and imagines our future together. The Season features programming for all ages and celebrates the diversity of cultures and languages in both countries. It emphasises Australia’s First Nations voices, enables cultural exchange with Wales, Scotland, England and Northern Ireland, and the diverse societies that have emerged in both Australia and the UK through migration.

Search begins for precious Australian children’s artworks in the UK 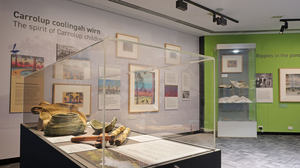 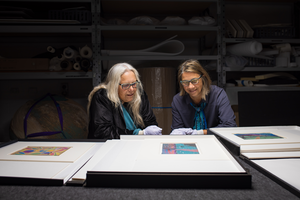 Kathleen Toomath and Michelle Broun with the children's works. 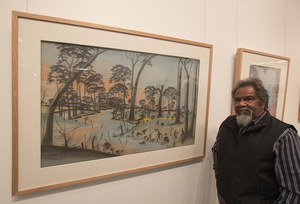