New Curtin-led research has pinpointed the exact home of the oldest and most famous Martian meteorite for the first time ever, offering critical geological clues about the earliest origins of Mars.

Using a multidisciplinary approach involving a machine learning algorithm, the new research - published today in Nature Communications - identified the particular crater on Mars that ejected the so-called ‘Black Beauty’ meteorite, weighing 320 grams, and paired stones, which were first reported as being found in northern Africa in 2011.

The researchers have named the specific Mars crater after the Pilbara city of Karratha, located more than 1500km north of Perth in Western Australia, which is home to one of the oldest terrestrial rocks.

Lead author Dr Anthony Lagain, from Curtin’s Space Science and Technology Centre in the School of Earth and Planetary Sciences, said the exciting discovery offered never-before-known details about the Martian meteorite NWA 7034, known as ‘Black Beauty’, which is widely studied across the globe. Black Beauty is the only brecciated Martian sample available on Earth, meaning it contains angular fragments of multiple rock types cemented together which is different from all other Martian meteorites that contain single rock types.

“For the first time, we know the geological context of the only brecciated Martian sample available on Earth, 10 years before the NASA’s Mars Sample Return mission is set to send back samples collected by the Perseverance rover currently exploring the Jezero crater,” Dr Lagain said.

“Finding the region where the ‘Black Beauty’ meteorite originates is critical because it contains the oldest Martian fragments ever found, aged at 4.48 billion years old, and it shows similarities between Mars’ very old crust, aged about 4.53 billion years old, and today’s Earth continents. The region we identify as being the source of this unique Martian meteorite sample constitutes a true window into the earliest environment of the planets, including the Earth, which our planet lost because of plate tectonics and erosion.”

The discovery was made thanks to an algorithm that was developed in-house at Curtin by an interdisciplinary group that included members the Curtin Institute for Computation and the School of Civil and Mechanical Engineering, as well as the CSIRO and the Australian Space Data Analysis Facility, with funding from the Australian Research Council.

Using one of the fastest supercomputers in the Southern Hemisphere at the Pawsey Supercomputing Research Centre, and the Curtin HIVE (Hub for Immersive Visualisation and eResearch), researchers analysed a very large volume of high-resolution planetary images through a machine learning algorithm to detect impact craters.

Co-author Professor Gretchen Benedix, also from Curtin’s Space Science and Technology Centre in the School of Earth and Planetary Sciences, said this research paved the way to locate the ejection site of other Martian meteorites, in order to create the most exhaustive view of the Red Planet’s geological history.

“We are also adapting the algorithm that was used to pinpoint Black Beauty’s point of ejection from Mars to unlock other secrets from the Moon and Mercury,” Professor Benedix said.

“This will help to unravel their geological history and answer burning questions that will help future investigations of the Solar System such as the Artemis program to send humans on the Moon by the end of the decade or the BepiColombo mission, in orbit around Mercury in 2025.”

The full paper, ‘Early crustal processes revealed by the ejection site of the oldest Martian meteorite’, can be viewed online here. 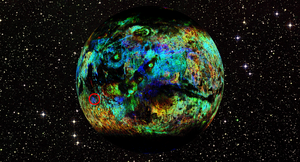 The distribution of 90 million craters on the surface of Mars obtained from the Crater Detection Algorithm.