If you switch a bit in the memory of a computer and then switch it back again, you have restored the original state. There are only two states that can be called "0 and 1".

However, an amazing effect has now been discovered at TU Wien (Vienna): In a crystal based on oxides of gadolinium and manganese, an atomic switch was found that has to be switched back and forth not just once, but twice, until the original state is reached again. During this double switching-on and switching-off process, the spin of gadolinium atoms performs one full rotation. This is reminiscent of a crankshaft, in which an up-and-down movement is converted into a circular movement.

This new phenomenon opens up interesting possibilities in material physics, even information could be stored with such systems. The strange atomic switch has now been presented in the scientific journal Nature.

Coupling of electrical and magnetic properties

Normally, a distinction is made between the electrical and magnetic properties of materials. Electrical properties are based on the fact that charge carriers move - for example electrons that travel through a metal or ions whose position is shifted.

However, there are also materials in which electrical and magnetic phenomena are very closely coupled. Prof. Andrei Pimenov and his team at the Institute of Solid State Physics at TU Wien are researching such materials. "We exposed a special material made of gadolinium, manganese and oxygen to a magnetic field and measured how its electrical polarisation changed in the process," says Andrei Pimenov. "We wanted to analyse how the electrical properties of the material can be changed by magnetism. And surprisingly, we came across a completely unforeseen behaviour."

Back to the beginning in four steps

"This is extremely remarkable," says Andrei Pimenov. "We perform four different steps, each time the material changes its internal properties, but only twice does the polarisation change, so you reach the initial state only after the fourth step."

A closer look shows that the gadolinium atoms are responsible for this behaviour: They change their spin direction at each of the four steps, each time by 90 degrees. "In a sense, it's a four-stroke engine for atoms," says Andrei Pimenov. "In a four-stroke engine, too, it takes four steps to get back to the initial state - and the cylinder moves up and down twice in the process. In our case, the magnetic field moves up and down twice before the initial state is restored and the spin of the gadolinium atoms points in the original direction again."

Theoretically, such materials could be used to store information: a system with four possible states would have a storage capacity of two bits per switch, instead of the usual one bit of information for "0" or "1". But the effect is also particularly interesting for sensor technology: for example, one could produce a counter for magnetic pulses in this way. The effect provides important new inputs for theoretical research: it is another example of a so-called "topological effect", a class of material effects that have been attracting a lot of attention in solid-state physics for years and should enable the development of new materials.

A four-stroke engine for atoms 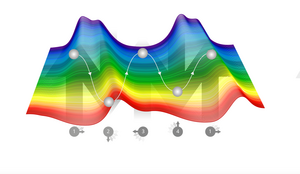