In Science Magazine, TU/e researchers publish teir research on new phase transitions of solutions and gels in water, which instinctively go against the basic principles of chemistry – and which they discovered by accident.

In chemistry, everyone learns that you can go from a hydrogel to a liquid by diluting the hydrogel with water. For the reverse transition, you increase the concentration. However, TU/e researchers led by Bert Meijer accidentally discovered that their liquid solution turned into a hydrogel when diluted. This phenomenon hadn’t been researched or described before and will have consequences in many areas in chemistry and biology. The finding, which appears in Science Magazine, was made and researched thanks to exceptional teamwork.

The research focuses on the formation of certain hydrogels. This means that it starts with an aqueous solution of, in this case, two substances (a surfactant and a monomer). The research shows that a gel is formed at a specific ratio of these two substances in water. This gel is formed by long supramolecular networks composed of both substances. The amounts of these substances in water (the concentrations) also determine where the phase transition of the gel formation is located. And when you decrease the concentration without changing the ratio between the two components, the gel dissolves and you have a liquid. So far, this is familiar territory.

What is extraordinary, however, is that if the solution is diluted even further, a gel is formed again. Other supramolecular structures now form and it becomes a hydrogel again. And if it is then diluted even further, it becomes a liquid again. The paper carefully examined what the correct proportions of the active substances should be and at which concentrations the phase transitions take place. These transitions are also fully reversible. If concentrations are increased, the transitions from liquid to gel to liquid to gel occur at the same points. This phenomenon should be present in other fields, such as biology, but has never been researched and documented before. This is why Science Magazine has decided to publish the article.

This so-called dilution-induced self-assembly has been the subject of research in Bert Meijer's research group for about ten years. However, it was difficult to achieve these transitions to form a solid and to get it working in aqueous solutions. So, when Jesús Mosquera and Cyprien Muller accidentally discovered in October 2019 that their liquid mixture of two components became a hydrogel when diluted, everyone in the group was amazed and excited.

“It is very valuable to show that what you learn in your first chemistry lessons does not always hold. When diluting, not all gels and solutions become liquids by definition,” says Meijer.

Lu Su, lead author of the Science paper, was immediately intrigued by that result. “It was a special, accidental finding. And I immediately saw more possibilities. What if we were able to demonstrate a double transition? So, from a gel to a liquid, back to a gel and back to a liquid just by adding more water.”

The enthusiasm of the young researchers was contagious. “I have to be honest, when Jesús and Cyprien started their research, I was not immediately convinced that we had something special on our hands,” says Meijer. “But as a group leader, you have to support and trust young researchers when they start something they are excited about and you don't yet see it yourself. As it was a new area for us, my intuition told me to be positive. And that's the funny thing about research. Often, what you design in advance doesn't work, but you can discover the unforeseen by accident. That is why I have supported them from the start in setting up and developing their research.”

The timing of the finding is important to mention because not long afterwards, the whole world was faced with lockdowns and the TU/e labs also closed. That gave Su a lot of time to think about how she could tackle this with her colleagues after Jesús and Cyprien left the Netherlands to pursue careers abroad. “During Teams meetings, we brainstormed with the group how we could set up the experiments. Together, we came up with a good setup for additional experiments.”

So, when the labs reopened in the summer of 2020, they immediately dived into the lab to see if their ideas were right. “And it turned out to be right!” Su says enthusiastically. “Within a month, we had done the basics of our experiments and demonstrated the hydrogel-solution-hydrogel-solution (gel-sol-gel-sol) transitions.”

In the fall, the researchers jointly wrote the first draft of their article, but the work was not yet finished. “When you find something special, you want to make sure that your interpretations are correct. That is why I encouraged them to invest in ensuring reproducibility and broadening the scope,” says Meijer. A new set of experiments was set up by Su. Unfortunately, because of her pregnancy, she was unable to perform them in the chemical lab herself, but colleagues were able to take over from her. Experiments were repeated several times to get even more reliable results.

“It's really special how in our group – our 'dream team' – there was always someone who wanted to help out. We were all so fascinated by this research and wanted to know what it was all about. I helped colleagues, they helped me, and that's what made this whole process such a wonderful experience,” Su continues.

The collegiality in the group and the collaboration within the Dutch scientific world often come up when you speak to Meijer and Su, and not just in the workplace. During her maternity leave, her parents were unable to travel to the Netherlands because of all of the corona measures. Su: “Bert was so supportive of me, including during my maternity leave. This meant so much to me, to feel so welcome and supported by my colleagues.”

When she returned from her leave, there were changes in the team again as colleagues graduated and obtained their PhDs. Shikha Dhiman took it upon herself to map the kinetics of the supramolecular structures. And Mathijs Mabesoone, whom Su dubs the 'modeling wizard', took care of the modeling of the processes that take place at the phase transitions – a model that he completed at the end of his PhD, when he was already working in Switzerland.

“And then I thought, yes, now we have everything in our hands for a thorough publication in a top journal,” says Meijer. “After all these years, I now have a reasonable intuition for what it takes. And why publish in Science, some will wonder. Well, it's good to participate in that 'competition' every now and then; it keeps us sharp. Research is absolutely no less valuable without such an article, don't get me wrong. But as a researcher, it is also satisfying when your research is published in a scientific journal that is so widely read.”

According to Meijer, it is difficult to say how extensive the effects of their discovery will be, but it is certain that it will have a major impact on chemistry and biology. “Such hydrogels may be good solutions for existing challenges, such as for the cultivation of stem cells. In the gel, the cells can safely divide into three dimensions and, once there are enough, you dilute the solution and the cells can be used right away. That is, for example, research that we are currently doing together with the group of Patricia Dankers. The trick is, of course, to find the right substances that exhibit this behavior but do not react to the cell walls or stick to them. In this way, our research leads to other research.”

The article ‘Dilution-induced gel-sol-gel-sol transitions by competitive supramolecular pathways in water’ appears in Science on July 8, 2022.

Most of the authors no longer work at TU/e. Lu Su left for Leiden University to work as an assistant professor. The group is continuing the research under the leadership of Bert Meijer and Ghislaine Vantomme.

Chemists find a contrary effect: How diluting with water makes a solution firm 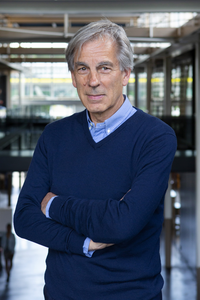 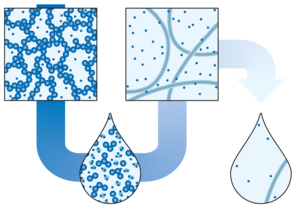 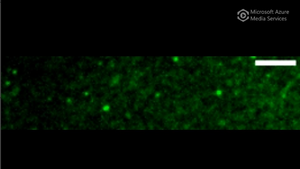 Kinetics of phase transitions in water