Nanoscopy describes the ability to see beyond the generally accepted optical limit of 200–300 nm. Stimulated emission depletion (STED) microscopy, developed by Stefan W. Hell and Jan Wichmann in 1994, and experimentally demonstrated by Hell and Thomas Klar in 1999, is a superresolution technique for nanoscopy. STED microscopy has made considerable progress and is widely used in practical research. But its practical use involves some undesirable background noise, which negatively affects spatial resolution and image quality. In general, this noise comes from two signal sources: (i) fluorescence generated by re-excitation caused by ultrahigh light doses from the depletion beam; and (ii) residual fluorescence, due to insufficient depletion of the inhibition beam.

Significant background removal approaches have been developed over the past decades. These can be divided into three categories: time-domain, space-domain, and phasor-domain. Some of these methods are long-standing and some are more recently developed. While powerful ways to remove undesirable noise from STED microscopy images, they all entail drawbacks, including image distortion, prolonged acquisition times, or introduction of shot noise. STED microscopy has yet to achieve its full potential.

As reported in Advanced Photonics, researchers from Zhejiang University recently developed a novel method called “dual-modulation difference” STED (dmdSTED) to suppress backgrounds selectively and effectively. The method works by sorting space-domain signals into the frequency domain so that the nondepleted fluorescence and STED-induced background are conveniently separated from the desired fluorescent signals. The excitation and the depletion beams are loaded respectively with different time-domain modulations. Since it avoids the re-excitation caused by the depletion beam, a depletion laser with a wavelength closer to the peak of the fluorescence emission spectrum of the sample can be selected, thus reducing the required depletion intensity.

The current version of dmdSTED performs with spatial resolution of λ/8, higher resolution than that of the phasor-domain methods (e.g., SPLIT, λ/5) which are prone to shot noise. Theoretically, potential signal loss by time-domain approaches (like time-gating) can be avoided by this approach. In addition, dmdSTED is compatible with either pulsed or continuous-wave scenarios, and hardware for time-correlated single-photon counting (TCSPC) is not required. Compared with space-domain methods, the time resolution of dmdSTED is not confined. Thus, dmdSTED is advantageous in acquisition of comprehensively fine microscopy images, in spatial resolution, SNR, and time resolution.

According to senior author Xu Liu, director of the State Key Laboratory of Modern Optical Instrumentation, “This frequency-domain method possesses great potential to integrate into other dual-beam point-scanning techniques, like excited state saturation microscopy (ESSat), charge state depletion microscopy (CSD), ground state depletion microscopy (GSD) and so on.” Liu remarks, “In addition, it can accept more types of samples with spectral characteristics different from commonly used fluorescent dyes in STED, such as some quantum dots with a wider excitation spectrum.” 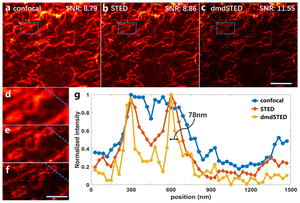