A committed and lucky birdwatcher in Alaska may see an elusive bluethroat north of the Brooks Range, catch a glimpse of the bold markings on a harlequin duck as it zips along an Interior river, encounter all four species of eider in Utqiaġvik, or take in the sounds of thousands of feeding shorebirds in the Copper River Delta.

Thousands of birdwatchers flock to Alaska each year, drawn by the chance to check rare and hard-to-find species off a Big Year list. In doing so, they provide an often overlooked boost to the economy and incentive for conserving habitat.

New research by the University of Alaska Fairbanks and Audubon Alaska found that nearly 300,000 birders traveled to the state and spent about $378 million in 2016. Birdwatching supported roughly 4,300 jobs in Alaska that year, a number similar to the mining and telecommunications industries but not necessarily similar in total income for jobholders.

Compared to other tourists, birders in Alaska spent more money, stayed longer and traveled to more roadless and remote regions of the state during their visit. Prompted by the need for stealth and insider knowledge on birding spots, birdwatchers tended to travel in smaller groups and engage in more activities, like guided tours, than other nonbirders.

Beyond generating money and jobs for Alaska, birdwatching tourism is a sustainable activity and supports habitat conservation.

“Once you have visitors who are coming to Alaska spending money on viewing rare species that our surroundings provide the critical habitat for on a global scale, it becomes an incentive to keep that habitat high quality for birds,” explained Tobias Schwoerer, the study lead and an economist at the UAF International Arctic Research Center.

“Independent travelers are more likely to take a flight out to the Pribilofs, or go to the Aleutians to see an exotic species they can’t find elsewhere, or book a trip with a small operator who drives Sprinter vans from Fairbanks to Prudhoe Bay,” Schwoerer said.

The study was inspired by visitors who departed the typical tourism path and emerged with binoculars in hand at Haines Chilkat Bald Eagle Preserve, where Natalie Dawson led birding hikes and bike rides. Dawson, previously with Audubon Alaska, initiated the study and recruited Schwoerer for the economic analysis.

“This study gives us a glimpse of how diverse our state's tourism is and can be in the future, as well as how intertwined our communities are with visitors in the shared experience of marveling at the wonders of birds,” Dawson said.

To quantify the economics of Alaska's bird tourism, Schwoerer engaged the Alaska Visitors Statistics Program, a statewide study commissioned by the Alaska Department of Commerce, Community, and Economic Development. Every four years, interviewers contact visitors as they exit Alaska via air, cruise, or the marine and land highway systems. The survey gathers information on visitors’ activities, the amount of money they spent, and where and how they traveled across the state.

Schwoerer incorporated these visitor statistics into a computer model to visualize how birdwatchers’ spending trickled through the economy. Nearly half of the bird-related tourism spending took place in Southeast Alaska, typically on tours. Well-known birding destinations like Nome also emerged as hot spots for birdwatcher spending and illustrated the economic benefit to communities of investing in nature-based tourism infrastructure.

“Sustainable and well-managed birdwatching is a growth sector. Birdwatching in Alaska is a type of tourism where Alaskans can capitalize on the region’s intact lands and waters,” said David Krause, Audubon Alaska’s interim executive director and director of conservation. “It’s an exciting place of opportunity that protects irreplaceable and fragile ecosystems while supporting jobs.” 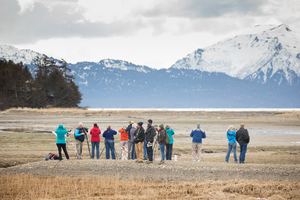