Can alchemy be described as a protoscience? Do ancient texts with obscure formulas and procedures describe mystic rituals and allegoric visions? Or do they record instructions to carry out real scientific experiments? In other words, can alchemy be considered the ancestor of chemistry?

A group of scholars at the University of Bologna comprising philologists, historians of science, and chemists has attempted to answer these questions. To do so, they not only revived and studied ancient alchemical texts in detail but also put the described procedures into practice in the laboratory. The results of this interdisciplinary work - developed within the AlchemEast ERC project awarded to Prof. Matteo Martelli, Department of Philosophy and Communication Studies - have been published in the journal PNAS.

“Experimental replications of ancient alchemical procedures make it possible to gain first-hand experience of the several millennia of alchemy’s history by compressing it into experiments that force modern and ancient science to dialogue in completely new ways,” explains Marianna Marchini, a researcher at the Department of Chemistry "Giacomo Ciamician” of the University of Bologna as well as the first author of the study. “In this way, it was possible to bring back to the laboratory recipes that had not been put into practice for centuries.”

The investigation focused on one of the most fascinating elements in the history of alchemy: mercury. Indeed, its unique chemical and physical properties caught the attention of ancient alchemists who conceived it as a constituent common to all metals. Notably, several ancient sources outlined procedures for the extraction of mercury from the mineral cinnabar.

Starting with the earliest records appearing in the classical writings of Theophrastus and Vitruvius, scholars have covered the founding texts of alchemy: papyri dating back to Greco-Roman Egypt in the first centuries CE, a series of recipes attributed to Democritus, and the texts of the alchemist Zosimus of Panopolis. These documents were studied in both Greek and Syriac, and in some cases translated for the very first time. Recipes and procedures found in the sources were then reproduced with modern tools following the instructions to the letter with truly surprising results.

“The laboratory work revealed an unexpected variety of methods for mercury extraction. Some of these have not been addressed by modern chemistry,” confirms Lucia Maini, associate professor at the Department of Chemistry "Giacomo Ciamician” of the University of Bologna as well as one of the authors of the study. “We traced the origins of mechanical chemistry from texts dating back to the 4th century BCE when cinnabar began to be ground in copper mortars to extract mercury. Later, experiments continued with other metals such as tin and lead.”

Laboratory experiments also revealed the central role of iron in sublimation extraction procedures, i.e. the process of turning a substance from a solid to a gas state. In addition, the ancient recipes also revealed the use of unexpected and evocative substances such as natron, a mineral with an alleged "purifying" value intrinsically linked to the culture and religion of ancient Egypt. The reaction of cinnabar with natron was thus “rediscovered” and tested in the laboratory.

“Today, there seems to be a dangerous dichotomy concerning science, between the people who believe in it and those who don't. This insidious polarisation loses sight of the foundation of science: the long path of experimental research," comments Matteo Martelli, ERC Grant holder for the AlchemEast project and co-author of the study. "Our research retraced one of these paths and showed that chemistry can reclaim a history of millennia that has been left in oblivion. Moreover, it can bring back to the laboratory techniques and procedures that for centuries have remained outside the spaces where scientific knowledge is currently generated and tested.”

The study has been published in the journal PNAS under the title “Exploring the ancient chemistry of mercury”. It has been carried out by a research group of the University of Bologna: Marianna Marchini, Massimo Gandolfi, and Lucia Maini from the Department of Chemistry “Giacomo Ciamician” in collaboration with Lucia Raggetti and Matteo Martelli from the Department of Philosophy and Communication Studies.

Exploring the ancient chemistry of mercury 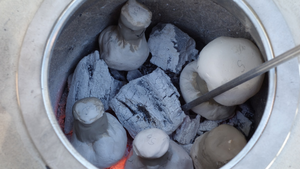 Clay crucibles inside a furnace