SAN ANTONIO — July 7, 2022 — When NASA’s OSIRIS-REx spacecraft collected samples from asteroid Bennu’s surface in 2020, forces measured during the interaction provided scientists with a direct test of the poorly understood near-subsurface physical properties of rubble-pile asteroids. Now, a Southwest Research Institute-led study has characterized the layer just below the asteroid’s surface as composed of weakly bound rock fragments containing twice the void space as the overall asteroid.

“The low gravity of rubble-pile asteroids such as Bennu weakens its near-subsurface by not compressing the upper layers, minimizing the influence of particle cohesion,” said SwRI’s Dr. Kevin Walsh, lead author of a paper about this research published in the journal Science Advances. “We conclude that a low density, weakly bound subsurface layer should be a global property of Bennu, not just localized to the contact point.”

Fitting its designation as a “rubble-pile asteroid,” Bennu is a spheroidal collection of rock fragments and debris 1,700 feet in diameter and held together by gravity. It is thought to have been formed after a collision involving a larger main-asteroid-belt object. Rocks are scattered across its heavily cratered surface, indicating that it has had a rough-and-tumble existence since being liberated from its much larger parent asteroid some millions or billions of years ago.

The goal of OSIRIS-REx (Origins, Spectral Interpretation, Resource Identification, and Security–Regolith Explorer) mission is to collect and return at least 60 grams of surface material from Bennu and deliver it to Earth in 2023. Sample collection activities provided additional insights.

According to Walsh, researchers involved in the OSIRIS-REx mission have so far measured Bennu’s thermal properties and craters to estimate the strength and porosity of discrete particles of rubble-pile asteroids. The ensemble of particles, or regolith, at an asteroid’s surface controlling and influencing long-term evolution have not yet been probed directly until now.

“The SamCam images bracketing the moment of contact show the contact caused considerable disturbance at the sample site,” said Dr. Ron Ballouz, a co-author from Johns Hopkins University’s Applied Physics Laboratory. “Nearly every visible particle is moved or re-oriented at all points along the circumference of TAGSAM up to a 15-inch radius.”

These SamCam images showed the downward force of TAGSAM lifted a nearly 16-inch rock. Though strong enough to withstand breaking, the rock was re-oriented and small debris lofted off its surface. The mobility of these millimeter-scale particles under relatively weak forces suggests minimal cohesive bonding with the surface of the larger rock.

Scientists have theorized that the average regolith particle size increases as asteroid size decreases, because larger bodies retain smaller materials due to a higher surface gravity. The team then compared Bennu to similar rubble-pile asteroids.

“We discovered a dichotomy between the rough, boulder-covered surfaces of Bennu and Ryugu versus Itokawa, which includes ponds of smaller particles across 20% of its surface,” Walsh said. “This could have several explanations, including that the latter’s near-surface has compressed enough to frustrate these microparticles percolating into the interior or perhaps the granular deposits are subsurface layers revealed by a recent disruptive reorganization of the body.”

A companion paper in the journal Science and co-authored by Walsh characterized the 30-foot-long elliptical crater excavated by the TAGSAM arm when it collected the sample. The event mobilized rocks and dust into a debris plume, exposing material that is darker, redder and more abundant in fine particulates than the original surface. The displaced subsurface material’s bulk density is about half that of the asteroid as a whole. 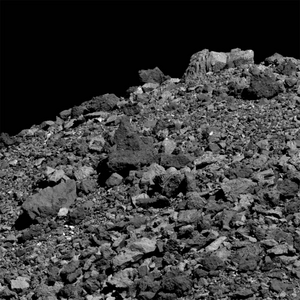 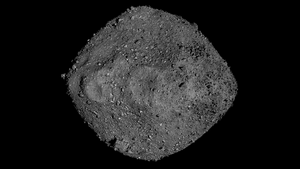