Owing to their coherent light-emission properties with high brightness and narrow spectral line width, the most promising lasers of deterministic single photons and entangled photons operated in multi-mode are easier to be obtained based on as-grown semiconductor wire-like structures. Nevertheless, multiple frequencies laser output will lead to time-domain pulse broadening and false signaling because of group velocity dispersion, which strongly limited their applications. Further, in the procedure of laser miniaturization, the monochromaticity of the lasing output becomes highly desirable because of less mode competition, better beam quality, and higher stability. During recent decades, effective mode manipulation and selection strategies have been intensively researched to achieve single-mode operation with both spatial and spectral controllability—a requirement for enhanced laser performance with higher monochromaticity, less mode competition, and better beam quality. Obtaining single-mode operation depends on sufficiently modulated gain and loss, but such modulation is impeded by factors such as inhomogeneous gain saturation. Several approaches have been developed that make use of an additional cavity for the intracavity feedback, distributed feedback gratings, an enlarged free spectral range through mode size reduction, or spatially varied optical pumping. However, these experimental schemes are applicable to specific configurations; what is desired is a general design concept with flexible control of cavity modes.

As previously reported that, the realization of electrically driven lasing actions has been achieved, but exhibited much more lasing modes, lower laser quality, higher threshold, higher background of spontaneous radiation and so on. Therefore, the expected search for a kind of compact and suitable approach for single-mode lasing operation with the merits of easy manipulation and engineering lasing modes without damage to the optical cavity has already become a problem, which needing urgent resolution.

In a new paper published in Light Science & Application, a team of scientists, led by Professor Daning Shi from Nanjing University of Aeronautics and Astronautics, and co-workers have proposed a new concept of "superabsorption", which to some extent solves the difficulty of realizing single-mode laser in microscale microcavity. Based on the superabsorption, they designed an n-PtNPs@ZnO:Ga MW/Pt/MgO/p-GaN heterojunction, which has excellent lasing performance with single-mode operation. More interestingly, large-size PtNPs working as superabsorbers can lock a single mode of the multimode lasing not only upon pulsed excitation, but also upon electrical-excitation. The reported method and technique will open new avenues for design and construct single-mode microlasers, specifically for developing ultralow-threshold lasers based on commonly-used one-dimensional wired micro- and nanostructures.

“In the laser architecture, the inserted MgO nanofilm can function as a dielectric layer to engineer the band alignment of the ZnO:Ga/GaN heterojunction, lowing the electron leakage, yielding the electron-hole recombination in the single ZnO:Ga MW active media; while the insertion of Pt buffer nanolayer can facilitate the current injection and optimize the junction quality. Thus, the incorporation of Pt/MgO buffer layers can integrate the depletion layer, laser medium and microresonator in the single ZnO:Ga MW, realizing multimode lasing actions in the ultraviolet region.”

“By manipulating the cavity resonant modes, the incorporation of PtNPs, potentially showing superabsorber behavior, can lock a desired lasing mode in the higher energy side of multimode lasing in the as-constructed single bare MW-based microlaser. The intriguing properties of PtNPs were also characterized experimentally and theoretically, illustrating that the lasing mode selection and competition of a single ZnO:Ga MW can be modulated by incorporating PtNPs with desired sizes upon optical pumping. The achievement of single-mode microlasers with high repeatability and controllability was also examined. ”

“The presented technique can supply a brand-new approach to design and construct single-mode microlasers, specifically for developing ultralow-threshold lasers based on commonly used one-dimensional wire micro/nanostructures.” the scientists forecast. 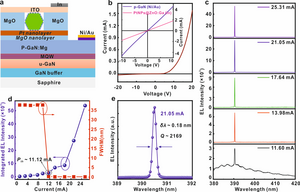