When it comes to achieving success, Kartik Balachandran takes an unorthodox view: “Fail fast, fail cheap.” As an associate professor of biomedical engineering at the University of Arkansas, Balachandran specializes in building microphysiological systems -- 3D organ constructs engineered from human cells and tissues that mimic critical human functions. Informally referred to as “organs-on-chips” – and not the kind you use to swab up salsa – these chips are measured in inches and can simulate the basic functions of the liver, heart, lungs or most any other organ with remarkable accuracy.

This makes organs-on-chips incredibly useful benchtop platforms for studying and understanding biological mechanisms, including what happens when diseases, toxins or trauma interfere with them. Organs-on-chips also have a crucial role to play in developing new therapeutic treatments.

“There are thousands of candidate molecules that chemists come up with,” Balachandran explains. “Then they have to figure out which [pharmacological drugs] are going to be successful.”

This typically involves an exhaustive process of animal testing to weed out bad candidates, followed by several rounds of human testing in clinical trials, until finally the best candidate emerges – a process that can take a decade or more.

“If we take a look at the success rates, they’re quite abysmal,” Balachandran says. Of the initial thousand candidates, “You have maybe one that succeeds in the end. So the motivation for this field was to come up with a method where you can really identify the candidate drugs that will be most successful in a human application and then model that.”

In essence, organs-on-chips greatly reduce the need for animal testing by proceeding directly to human testing – without the concerns of harming actual humans. Experiments can be run quickly and cheaply, compared to clinical trials, so dead ends are discovered and abandoned much faster. In short, the system is designed to fail fast and cheap, accelerating the long journey to a successful therapeutic or basic scientific advance.

Of his initial interest in this work, Balachandran says, “I just thought that this was a really exciting field. There are so many diseases that are surrounded by unknowns. Nobody knows why they occur. Treatments are unknown or inadequate. So, I thought, if we can create human models without doing human trials, maybe that’s the way to go. This is how I can make an impact in the field.”

In the back corridors of the Engineering Research Center (ENRC), located in the Arkansas Research and Technology Park, you’ll find Balachandran’s lab, nicknamed the Balalab. There he oversees a team of graduate and postdoctoral students that averages around three to five a year, along with a comparable number of undergraduates. At present, the team is focusing on three organs: heart, lung and brain. The lab is working under several ongoing grants, two of which were awarded in 2022.

The first is a $298,000 grant from the Department of Defense to develop and study the effects of particulate matter pollution on the nasal airway and lung interface. To do this they will create the first in vitro benchtop system to incorporate both the upper and lower respiratory systems into a single model – or chip.

Amanda Walls, a PhD student in biomedical engineering, co-wrote the lung-on-a-chip grant with Balachandran and is creating a working model of the nasal component. She said the emphasis is on “showing that the cells can survive on the chip the same as they can in a normal culture. Then I’ll be exposing them to particulate matter, probably without flow first, just seeing how particulate matter affects them, and then I’ll move on to adding air flow.” Lastly, she’ll develop the lung component, which will connect to the nasal component of the chip through a silicone airway, not unlike an actual throat.

The second grant awarded to Balachandran in 2022 was $437,000 from the National Institute of Health to study the downstream effects of acute respiratory syndrome coronavirus 2 (SARS-COV-2) on the aortic valve. SARS-COV-2 is the virus that causes COVID-19, similarly to the way HIV can lead to AIDS. The goal of this grant is to gain a better understanding of the cause-and-effect relationship between the infection and heart valve pathology. This will involve development of a heart valve-chip that will simulate the structure and mechanics of human valve tissues. The chips will be enclosed and have channels for fluid to flow through, simulating blood flow. The project will be considered successful when they have achieved an effective model for viral infection of valve-chips and have obtained quantitative data in whether diseased valve-chips are more susceptible to viral infection compared to healthy valve-chips.

Perhaps the project that best represents the basic research and commercial aspects of Balachandran’s work is a blood-brain barrier (BBB) chip. He’s currently working under two grants: one from the National Science Foundation to develop a BBB chip to study the effects of single and repeated traumatic injuries to the brain, the other a Small Business Innovation Grant from the Department of Defense to develop a basic commercial BBB platform for the study of traumatic brain injuries - The Advanced Microphysiological Brain Injury Technology (AMBIT) Platform.

The first step is to validate a physiologically relevant platform of the BBB that mimics the brain’s vasculature and endothelial cells, a membrane (the barrier), and the connecting neurons and pericytes. Easier said than done.

Lais Andrade Ferreira, a Fulbright Scholar from Brazil and PhD student in cell and molecular biology, is managing the project. She said she came to the U.S. because she wanted to do work that involved stem cells, neuroscience and disease modeling. Balachandran’s lab checked all the boxes.

To create the BBB platform, Ferreira uses human cells obtained from skin biopsies that are commercially available. These cells are known as induced pluripotent stem cells, or IPSCs, and have been reprogrammed to a stem cell state. “Pluripotent” denotes cells that can be induced into becoming any other cell type. While it would be preferable to use primary brain cells, this would limit Ferreira to using animal cells, which don’t provide an accurate representation of the human brain.

Through a series of steps, which include introducing the cells to a nutrient and energy rich culture media and turning on or off signaling pathways, the IPSCs are induced into the desired cell types, such as endothelial cells for the blood vessel side of the chip, or pericytes on the neurological side. Pericytes help maintain the blood–brain barrier, regulate immune cell entry to the central nervous system and help control brain blood flow.

It can take days or weeks to grow a desired cell, so concurrently computer modeling is used to develop the chip design, simulating blood flow through the membrane -- from blood to brain, as it were. Physical chips are then manufactured onsite. The next step is getting the living cells attached to the chip and behaving in a physiologically relevant way. Once this is accomplished, the simulated organ will be subjected to stress in the form of a silicon sheet, which is attached to the chip and can be stretched and snapped to mimic a shock to the cells – or a traumatic brain injury.

As they develop models, Balachandran says, they are also consulting clinicians who better understand the basic biology of the organs under study and can help nudge the researchers toward better representations of natural physiology and pathologies. It’s a slow, iterative process of building prototypes until a comprehensive protocol has been devised.

But once the basic platform is validated, it doesn’t have to be exclusively used for traumatic brain injuries. It can be adapted to study a range of issues related to the BBB, including therapeutics for diseases like Alzheimer’s, whether that means trying existing or entirely new drugs.

Nanomatronix, a local company specializing in nanotechnology, microelectronics and biotechnology, is working with Balachandran to commercialize this technology. Gage Greening, a biomedical engineer working with Nanomatronix, explained the company’s interest this way: “Organ-on-chip technologies are revolutionizing the R and D space for diseases. And Dr. Balachandran is on the front end of this space. There is a unique business opportunity to explore technology that can be used to evaluate brain injury pathophysiology.” He added that while he saw the brain injury R and D as the primary market fit, the BBB chip clearly had implication across the field of neuroscience. Nanomatronix’s goal is to have a working prototype within two years.

Balachandran, for his part, is happy to see his work become commercially viable, but he maintains, “my primary passion is still the research side of things, understanding health and disease.”

The First Decade of Mentoring and Research

Since he was hired, Balachandran has authored or co-authored 27 papers, been a co-inventor on three patent applications, brought in more than $3 million in grants, advised 14 graduate students and received the College of Engineering’s Outstanding Teacher Award, Outstanding Researcher Award and, every year between 2013 and 2020, the Outstanding Mentor Award.

These last awards would seem to reinforce his own management philosophy: find good people and get out of the way.

Amanda Walls confirmed he practices what he preaches: “Dr. B’s great. He’s very supportive of whatever direction you want to go.” She said that when she arrived two years ago, her intention was to study viruses, since it was the height of the COVID-19 pandemic and on everyone’s mind. But as she read through the literature, she thought the effects of particulate matter on the lungs would be a more interesting avenue of investigation. “He was very on board with that,” Walls said, adding, “I think it’s super cool that he gives his students the freedom to pursue their interests.”

Balachandran has been with the Biomedical Engineering Department since its creation in 2012, among the first hires by inaugural chair, Ashok Saxena. In fact, the position was Balachandran’s first faculty position, as he was hired while doing a post-doctoral stint at Harvard. While entrusting their career to an unproven department with no history of accomplishment might have given some young faculty pause, Balachandran embraced the opportunity: “I thought it would be exciting to play a part in forming and developing this new department – whether that would be working with other faculty on the syllabus, the accreditations and setting up the research lab at the same time.”

Ten years later, his reasons for joining the U of A are largely unchanged. “Many of the things that initially excited me are still here. You know, it’s still a relatively new department in the bigger scheme of things, and I feel like I have a critical role to play in developing the biomedical engineering program.”

So long as it’s done fast and cheap, presumably. 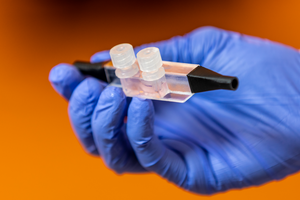 "Nasal airway on a chip" 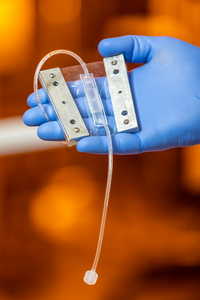 Prototype for the "heart valve on a chip." 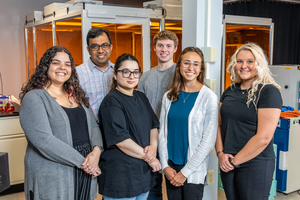