As the first mouse model that faithfully mimics brain damage caused by severe RVFV infection, it will permit the study of disease mechanisms in detail and provide an opportunity to conduct high-throughput preclinical testing of next-generation drugs, enabling development of therapies for a virus that is present throughout Africa. The study was published today in PLOS Pathogens.

“Rift Valley Fever can sweep across villages causing devastating consequences, but there are no drugs or vaccines that we can offer to people,” said senior author Anita McElroy, M.D., Ph.D., virologist and pediatric infectious diseases physician at Pitt’s School of Medicine and UPMC Children’s Hospital of Pittsburgh. “Before IV acyclovir became available in the 1990s, the outcome of herpes simplex virus encephalitis in newborns was horrible. But acyclovir turned that trend on its heel, and we would love to have the same success with RVFV encephalitis.”

A virus that mosquitos transmit between animals and people, RVFV is endemic to the African continent and belongs to a family of viruses identified by the National Institute of Allergy and Infectious Diseases (NIAID) workgroup on pandemic preparedness as likely to give rise to future pandemics.

Unlike other mosquito-borne infectious diseases such as malaria, RVFV can be spread by many species of mosquitos, expanding its potential to sweep across large distances and reach many hosts. Some blood sample surveys suggest that by adulthood, up to 50% of Africans living in endemic areas have been exposed to the virus in their lifetime. Even though the overall mortality rate of RVFV infection is relatively low, estimated between 1% to 3%, this virus causes major economic and public health impacts across Africa.

RVFV is spread by mosquitos from infected animals, especially livestock, eventually finding its way into people. Because the virus can also spread via bodily fluids across mucous membranes and through skin cuts and abrasions, farmers and butchers are particularly vulnerable to infection.

Once the virus infects a human, it can spread into the liver and the brain and cause hepatitis, encephalitis or both. Yet, despite the virus’s economic and human toll, a vaccine for RVFV has not been made commercially available, and efforts to develop an effective therapy have historically been stymied by the lack of an appropriate preclinical model.

Unlike humans, whose genetic diversity likely explains why some people develop mild disease and some succumb to liver failure or brain damage, common strains of mice injected with RVFV tend to die from liver disease.

To address this challenge and map out genetic differences that dictate how the infection presents itself in the body, McElroy and colleagues sought to identify a genetically diverse but stable mouse model by testing mice with different genetic backgrounds and measuring their susceptibility to RVFV infection. One strain, labeled CC057/Unc, consistently developed late-onset encephalitis and had a high viral load in the brain without developing severe acute hepatitis, making it particularly suitable to study the neurological form of the RVFV disease.

“It is impossible to study how RVFV causes brain disease if the animals die of liver failure,” said McElroy. “This new model is a critical step on the quest to figure out why some people who get infected with the virus recover and others die and how we can best help them.”

Additional authors of the paper include Haley Cartwright, Ph.D., Dominique Barbeau, M.S., Joshua Doyle, M.D., Ph.D., and Ed Klein, Ph.D., all of Pitt; and Mark Heise, Ph.D., and Martin Ferris, Ph.D., both of the University of North Carolina at Chapel Hill. 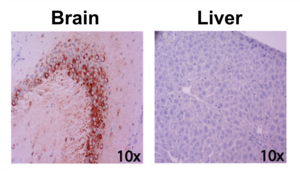