HOUSTON – (July 11, 2022) – Silents are potentially golden in the search for antibiotics to slow the ongoing crisis of resistance in the treatment of disease.

Rice University bioscientists have designed novel on and off switches to control the “silent” genes in a strain of bacteria. Their strategy could boost the perpetual search for new antibiotics.

The researchers customized CRISPR tools to control the expression of genes in Streptomyces bacteria that, in nature, are only expressed when necessary. Until now, those genes have been challenging for synthetic biologists to access.

“As labs started to sequence the genomes of these organisms that were known to produce one or a few antibiotics, we realized that the pathways responsible for the production of antibiotic and other molecules of interest are much more abundant than previously thought,” said James Chappell, an assistant professor of biosciences whose lab studies bacteria and ways to engineer them.

“Each Streptomyces strain is now predicted to be able to produce up to 40 different molecules of interest, including antibiotics, on average,” he said.

The work led by Chappell and graduate student Andrea Ameruoso may allow labs to quickly develop libraries of possible antibiotics to test on pathogens. Significantly, they said that while CRISPR-Cas9 has been used to create a platform to activate genes in organisms like Escherichia coli, this is the first time it’s been applied to Streptomyces.

“Bacteria such as Streptomyces have evolved to only produce antibiotics when they need to, in natural environments like soil,” Chappell explained. “When we grow them in the lab, it’s an artificial environment and very different to how they naturally grow, so sets of genes are silenced.

“They’re a kind of genetic dark matter,” he said. “We can’t isolate the chemicals they express to perform a functional screen.”

The lab’s new strategy eliminates the time-consuming task of exposing their proof-of-concept bacteria, S. venezuelae, the source of the common antibiotic chloramphenicol, to potential triggers for gene expression. “Andrea’s technology adds synthetic regulators into the cell to artificially stimulate or repress the expression of these pathways,” Chappell said.

“Now we just need one protein and one small piece of RNA and we can go wherever we want to directly repress or activate a given target,” Ameruoso added.

The emergence of CRISPR technology, which adapts bacterial immune system mechanisms to locate specific genes along a strand of DNA, simplified access to the previously hidden gene clusters, he said.

“Streptomyces is a genus of bacteria that encompasses up to 500 species, and each species can have between 20 and 40 of these clusters of genes able to produce antibiotics or other molecules of interest,” Ameruoso said. “So once we figure out a way to scale up our technology, it can be incredibly powerful.”

Chappell said it’s a simple matter to design CRISPR to bind to different DNA sequences. “We exploit that for gene expression control,” he said. “If we want to do this in a bunch of different species on a bunch of different pathways, it should in theory be possible. So this paper lays the foundation for a new type of approach.”

Ameruoso said he’s working on a fluorescent technique to observe the activation of clusters in real time. “The main challenge is that observing the depths of the activation of a cluster relies on the purification of the molecule from the extracts we generate,” he said. “That’s a low-throughput process that requires a lot of work. We want to develop a reporter to observe a fluorescent signal when a pathway is being activated.”

The researchers noted the process could be used to manufacture molecules for antifungal and anticancer agents or for agriculture. “We focus on antibiotics because at some point in history, we’ve observed that they kill microbes,” Chappell said. “But that’s not necessarily what they evolved for, because they’re also frequently used as communication signals between cells. So there are many potential uses.”

He said the study demonstrates an important new approach to the activation of silent pathways. “The vision for the next generation of the work is to go big,” he said. “We showed it works on a single silent pathway. Now let’s do it on the 40 pathways in this one species, and then let’s do it on thousands of microbes.

“The power of CRISPR-Cas9 is that it’s really scalable for that,” Chappell said.

This news release can be found online at https://news.rice.edu/news/2022/hidden-genes-may-be-tapped-new-antibiotics.

Rice University bioscientists have designed novel on and off switches to control the “silent” genes -- as many as 40 of them -- in a strain of bacteria. Their CRISPR-based strategy could boost the perpetual search for new antibiotics. (Credit: Illustration by Andrea Ameruoso/Chappell Lab)

Hidden genes may be tapped for new antibiotics 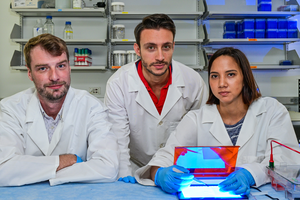