Superconductivity is a fascinating state of matter in which an electrical current can flow without any resistance. Usually, it can exist in two forms. One is destroyed easily with a magnetic field and has “even parity”, i.e. it has a point symmetric wave function with respect to an inversion point, and one which is stable in magnetic fields applied in certain directions and has “odd parity”, i.e. it has an antisymmetric wave function. Consequently, the latter should present a characteristic angle dependence of the critical field where superconductivity disappears. But odd-parity superconductivity is rare in nature; only a few materials support this state, and in none of them has the expected angle dependence been observed. In a new publication in PRX, the group by Elena Hassinger and collaborators show that the angle dependence in the superconductor CeRh₂As₂ is exactly that expected of an odd-parity state.

CeRh₂As₂ was recently found to exhibit two superconducting states: A low-field state changes into a high-field state at 4 T when a magnetic field is applied along one axis. For varying field directions, we measured the specific heat, magnetic susceptibility, and magnetic torque of this material to obtain the angle dependence of the critical fields. We find that the high-field state quickly disappears when the magnetic field is turned away from the initial axis. These results are in excellent agreement with our model identifying the two states with even- and odd-parity states.

CeRh₂As₂ presents an extraordinary opportunity to investigate odd-parity superconductivity further. It also allows for testing mechanisms for a transition between two superconducting states, and especially their relation to spin-orbit coupling, multiband physics, and additional ordered states occurring in this material.

The MPI CPfS (https://www.cpfs.mpg.de/en) is part of the Max Planck Society and was founded in 1995 in Dresden. It consists of around 280 employees, of which about 180 are scientists, including 70 doctoral students.

A proof of odd-parity superconductivity 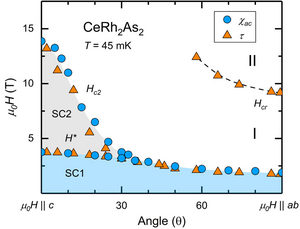 A proof of odd-parity superconductivity