For the first time, researchers successfully sequenced the genome of ancient human fossils from the Late Pleistocene in southern China. The data, published July 14 in the journal Current Biology, suggests that the mysterious hominin belonged to an extinct maternal branch of modern humans that might have contributed to the origin of Native Americans.

“Ancient DNA technique is a really powerful tool,” Su says. “It tells us quite definitively that the Red Deer Cave people were modern humans instead of an archaic species, such as Neanderthals or Denisovans, despite their unusual morphological features,” he says.

The researchers compared the genome of these fossils to that of people from around the world. They found that the bones belonged to an individual that was linked deeply to the East Asian ancestry of Native Americans. Combined with previous research data, this finding led the team to propose that some of the southern East Asia people had traveled north along the coastline of present-day eastern China through Japan and reached Siberia tens of thousands of years ago. They then crossed the Bering Strait between the continents of Asia and North America and became the first people to arrive in the New World.

The journey to making this discovery started over three decades ago, when a group of archaeologists in China discovered a large set of bones in the Maludong, or Red Deer Cave, in southern China’s Yunnan Province. Carbon dating showed that the fossils were from the Late Pleistocene about 14,000 years ago, a period of time when modern humans had migrated to many parts of the world.

From the cave, researchers recovered a hominin skull cap with characteristics of both modern humans and archaic humans. For example, the shape of the skull resembled that of Neanderthals, and its brain appeared to be smaller than that of modern humans. As a result, some anthropologists had thought the skull probably belonged to an unknown archaic human species that lived until fairly recently or to a hybrid population of archaic and modern humans.

In 2018, in collaboration with Xueping Ji, an archaeologist at Yunnan Institute of Cultural Relics and Archaeology, Bing Su at Kunming Institute of Zoology, Chinese Academy of Sciences, and his colleagues successfully extracted ancient DNA from the skull. Genomic sequencing shows that the hominin belonged to an extinct maternal lineage of a group of modern humans whose surviving decedents are now found in East Asia, the Indo-China peninsula, and Southeast Asia islands.

The finding also shows that during the Late Pleistocene, hominins living in southern East Asia had rich genetic and morphologic diversity, the degree of which is greater than that in northern East Asia during the same period. It suggests that early humans who first arrived in eastern Asia had initially settled in the south before some of them moved to the north, Su says.

“It’s an important piece of evidence for understanding early human migration,” he says.

Next, the team plans to sequence more ancient human DNA by using fossils from southern East Asia, especially ones that predated the Red Deer Cave people.

“Such data will not only help us paint a more complete picture of how our ancestors migrate but also contain important information about how humans change their physical appearance by adapting to local environments over time, such as the variations in skin color in response to changes in sunlight exposure,” Su says. 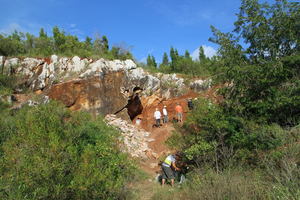 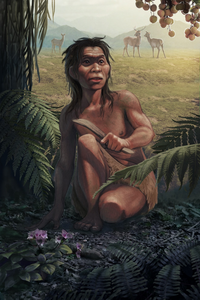 The reproduced portrait of the Red Deer Cave People or Mengziren