A pioneering low-cost device which takes 3D images could transform eye screening and treatment across the globe.

The device, developed by researchers from the University of Strathclyde, captures 3-D images of the retina, the back of the eye and cornea, and can be added at low cost to a slit lamp, a device commonly used by optometrists.

Patients with conditions such as glaucoma, the third most common cause of visual impairment worldwide, with an estimated 7.7 million people affected, are often diagnosed by highly-trained specialists, who look at photos and give a subjective opinion on the 3D structure of the back of the eye.

Although there are existing instruments for 3D imaging, including Optical Coherence Tomography technology – the machines can cost up to £100,000, often making them too expensive for large-scale population use, especially in low-income countries.

However, optometrists all over the world have access to slit lamps. The new technology is a simple and inexpensive add-on to a standard lamp, and can extend 3D eye imaging to all settings where optometrists are present.

It is so simple that a modified version of the technology brings potential of 3D retinal ‘selfies’ without an operator, meaning it could also be deployed in unassisted settings, like pharmacies.

The technology can also be used to image the front of the eye, which is important for cornea transplant patients as many machines can’t measure the edge of the cornea.

The device has been developed by Dr Mario Giardini, Dr Ian Coghill, and Kirsty Jordan, at the Department of Biomedical Engineering of the University of Strathclyde.

Dr Giardini said: “Patients can be imaged easily and inexpensively, without the need for a specialist to be present. Our device reliably takes 3D images, and it is comfortable and fast, at less than a second.

“The technology has the potential to revolutionise the screening and follow-up within the community of conditions such as glaucoma, as any optometrist, anywhere in the world, could afford it. This work makes eye diagnostics more accessible, reducing inequalities.”

Dr Iain Livingstone, Consultant Ophthalmologist at NHS Forth Valley, who has collaborated with Dr Giardini on previous ophthalmology projects, said: “So much of what we do as eye doctors depends on seeing things in 3D. While photographs can be helpful, this innovation uses visible light to re-create a high fidelity 3D representation of eye structures, allowing precise measurements to be taken in a completely new way, piggybacking on the method of examination we already do routinely.

“It’s a crucial addition to the way we interpret information, harnessing digital to glean so much more from a slit lamp exam, with potential reach far beyond the hospital toward Community Optometry, bringing nuanced measuring tools closer to home for patients.”

The researchers also hope it can eventually be used to detect eye cancer and Dr Livingstone added:  “This addition turns a slit lamp into a ‘3D eye scanner’ with potential to supplant ocular ultrasound for measuring solid tumours of the eye.”

The initial prototyping was funded by the Engineering and Physics Research Council, part of UK Research & Innovation. The next step is now to make the technology available to the medical community, and the University has partnered with IDCP, a digital innovation group, to turn it into a medical product.

CEO of IDCP group, Jan Boers, said: “Working with the University of Strathclyde to develop new technology for eye screening has been very productive, and this development will be a significant step for enabling more accurate, accessible, and cost-effective solutions to eye diagnostics globally. This is a great addition to our activities in the field of eye screening with RetinaScope and IDCP Scotland.”

Jamie Thomson, Managing Director of IDCP Scotland, who received support from Scotland’s national economic development agency Scottish Enterprise, with a SMART grant of £85,000, said: “As a University of Strathclyde alumnus, it gives me great pride to be working closely with the team helping to develop this technology, which has the potential to improve the quality of patient care and fits within IDCP Scotland’s key objective to revolutionise patient care within ophthalmology.” 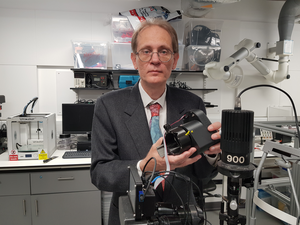 Dr Mario Giardini from the University of Strathclyde